With new designs now available, it may be time to consider installing a heat exchanger 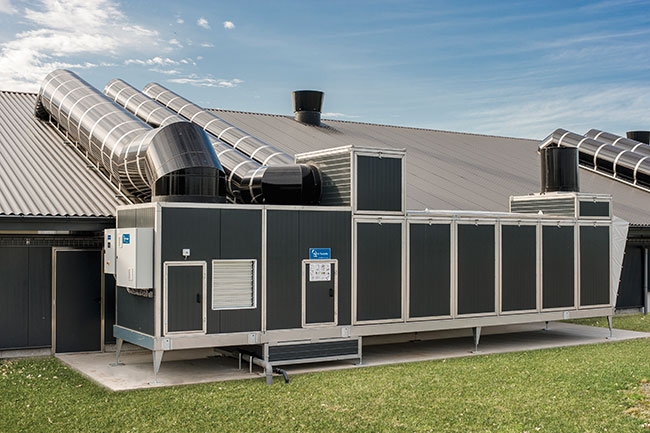 It’s been many years since heat exchangers arrived on the poultry industry scene. As with countless technologies, designs of new models are greatly improved over those of the past. Heat exchangers have become much easier to both clean and install, and in terms of efficiency, some manufacturers claim that current systems cut barn heating bills in half. The higher indoor temperatures of broiler operations make them more worthwhile than egg producers.

Indeed, although most farmers today look at heat exchangers as a way to help reduce heating bills, that’s just one of the benefits they provide, says Mark Relouw, president at Exacon, which distributes Avi-Air exchangers in Ontario and also the Recov-Aire.

“Another advantage…is the decreased time that incoming air has to warm up enough to start collecting moisture in the building, and the faster it can collect the ‘bad’ air to be exhausted out,” he says. “This very much helps with air quality and humidity control over regular exhaust ventilation.”

Mathieu Brodeur, president at Avi-Air, a heat exchanger manufacturer in Quebec, agrees that exchangers provide much more than savings on heating costs. “They are a great tool,” he says, “to improve your litter condition, bird health and welfare, and to reduce your farm’s environmental footprint.”

In years past, the high humidity and dust in poultry barns presented challenges for heat exchangers, requiring them to undergo a detailed cleaning during flock production. Now, most or all cleaning is between flocks and it’s much easier. For example, Brodeur notes that the core of the smaller units being manufactured in Canada today, in comparison to larger units that are mostly imported from Europe, are easily removed, allowing the cleaning process to be more efficient.

Some systems require more than one unit in the barn. Brodeur explains that having one larger unit with only one inlet requires recirculation ventilators to redistribute fresh air throughout the space, but smaller exchanger units are able to distribute the air around them (in the case of Avi-Air, about 80 feet). Older heat exchanger models also struggled with freezing in the winter months, notes Randy Taylor, sales director at manufacturer ESA, but these problems have been addressed.

Here is a roundup of attributes of some brands now available, with producer input where possible.

ESA
The ESA-SERIES exchangers use existing barn heat to defrost the inside of the unit as needed. They only require a 10-minute cleaning between flocks (remove the core, power wash and re-insert). The ESA-1000 also has a “very unique” patented ventilation system, Taylor says, with a single motor that pushes air in both directions and requires only single-phase power and 2.6 amps per unit.

“All other brands of heat exchangers use two motors and require twice the amount of electricity to operate them,” he says. “Another unique feature is our small footprint. We don’t require a slab of concrete and no ducting. You simply add more units depending on the quantity of chickens raised per flock. Our typical rule of thumb is one heat exchanger per 4,000 chicks.”

Broiler farmer Adam Schlegel installed an ESA exchanger last year in one of his barns at Schegelhome Farms near New Hamburg, Ont. He says he’s very pleased with the system and the barn environment it creates. He notes that it pre-warms incoming winter air by 15 to 20°C. “It’s a simple unit and it’s easy to clean,” Schlegel explains. “This design is also easy to put into a barn build. It’s a single opening and everything is mounted inside the barn. A lot of other systems have two fans, which obviously uses more power and requires more framing and so on to install.”

Schlegel runs his system year-round. “Even in the summer, the barn temperature has to be really high for chicks and you want to recover as much heat as possible at night, for example,” he says. “For the first two to three weeks of the cycle, it’s the only ventilation I have going.”

Avi-Air
Last fall, Keet Farm in Georgeville, Que., installed 23 heat exchangers across its broiler barns. After looking at various brands over the last few years, owner Jose Keet says he decided on Avi-Air as it had all the characteristics he was looking for: low maintenance, auto-flush and auto-defrost. “With the results we had this past winter, we figure they should pay for itself within four to five years depending on the barn efficiency,” he notes. “I have never seen such a dry litter in the winter since the installation of those machines.”

The core is washed between flocks, but dust is also flushed from the core of the Avi-Air every day through several automatic washing cycles. This rinsing system allows the cartridge to perform at full potential during broiler growing time, Brodeur says, and also make it a whole lot easier and much less time-consuming to clean compared to other systems.

Freezing of the condensate water in the core under cold temperatures is prevented by automated de-icing cycles. Brodeur adds that Avi-Air’s exchangers are compatible with the most popular Canadian modern controllers so that they are fully integrated with the barn’s ventilation and heating system.

“It becomes a much more cost-efficient investment since no standalone computer is needed to drive the Avi-Air in new barns,” he says. “However, a standalone is available for those barns equipped with older technologies.” Relouw adds that during the warm seasons, the intake fan can be used as an exhaust fan to almost double the exhaust ventilation.

Avi-Air has conducted its own studies on brooder heating time in two identical broiler barns next to each other, one with two Avi-Air heat exchangers and the other with conventional minimum ventilation.

“Over many flocks, from 2016 to 2018, we observed a yearly average of 45 per cent reduction in heating time in the barn with the heat exchangers,” Brodeur says. “Obviously, it was more significant from fall to spring than in summer; however, we observe some savings even in July for the first 10 days of production.”

This spring, Avi-Air is working with an independent organization called the Natural Gas Technology Centre to gather and analyze data on gas savings.

Recov-Aire
As mentioned earlier, Exacon also distributes the Recov-Aire heat exchanger, which has a smaller intake fan to help with heat recovery. Number of units depends on size of barn but its usually no more than two. “Installation is relatively easy depending how the customer wants incoming air brought in,” Relouw adds. “When the core is clean, it is very achievable to get 50 per cent efficiency and the units are very simple to operate. In very cold weather, frosting through the intakes can occur. In most cases, this can be managed depending how the exhaust and intake fans are assigned through the ventilation control.”

Eco ACU (AgroSupply)
In the winter, this unit achieves a thermal efficiency of up to 80 per cent, says Tom Randall, Eastern Canada sales representative at distributor Vencomatic. In warm conditions, recaptured condensation applied to the tubes causes considerable evaporative cooling of the incoming air – more than 13°C – without an increase in absolute humidity.

Advice for potential purchase
Brodeur’s best advice for farmers thinking of purchasing heat exchangers is to investigate ROI timelines. “Therefore, CFM (ft3/minute) output per dollar and heat core efficiency are critical,” he says. “In fact, look for how many days in a broiler cycle you can rely only on the heat exchangers to assure your winter ventilation (0°C and below).

Brodeur reminds broiler producers to remember that barn humidity starts to accumulate by one to three weeks of age. “You need 100 per cent of your exhaust air to go through the heat exchangers during that time,” he says, “to remove as much as humidity as possible.”