A heart for egg farming and a head for business. 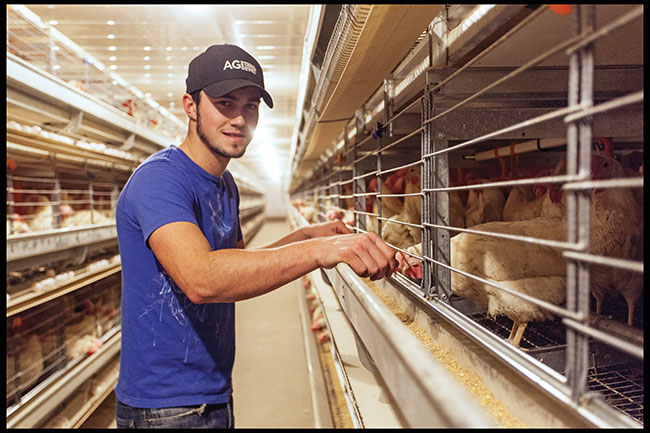 Blake Jennings, a fifth-generation egg farmer from Masstown, N.S., has been a passionate industry advocate from a young age. Photo: EGG Farmers of Canada

Nova Scotia egg producer Blake Jennings has always had a heart for farming and a head for business. At age nine, he started growing and selling squash, gourds and pumpkins at a roadside stand he opened in front of his family’s fifth-generation farm near Truro, an hour’s drive northwest of Halifax.

At 16, when he got his driver’s license, he started supplying pumpkins to the local Sobeys grocery store. Nine years later, Jennings, now 25, is the largest pumpkin producer in Atlantic Canada.

“Pumpkins are time sensitive like Christmas trees,” says Jennings, who hand picks and delivers more than one million pumpkins to Sobeys and Loblaw for the annual jack-o’-lantern market. “They’re worthless the day after Halloween.”

Jennings has always taken the same head’s-up, hands-on approach to his family’s egg business. The aptly-named Bayview Poultry Farms has 15,000 laying hens and pullets in two barns overlooking the Bay of Fundy.

From an early age, Jennings helped his grandfather Cecil, who founded the business in the 1950s, and his father Glen, a former executive vice chair of Chicken Farmers of Canada, to collect eggs, maintain equipment and clean barns.

Jennings also helped them to install the three small wind turbines that have powered the Jennings’ farm since 2007 – an initiative that made both industry and regional headlines for what was then a pioneering effort in both renewable energy and sustainable development.

“They help to reduce our operating costs,” Jennings says about the mills, which are amply powered by the winds from the nearby bay. “And we advertise our eggs as eco-friendly products because our birds are raised with the use of wind power.”

The Jennings made news again in 2014 – the year Jennings started working on the farm full-time, with a stated goal of one day taking over the family business – when they installed an enriched housing system for their birds.

The improvements included a doubling in everything from the amount of living space to the numbers of perches, nest boxes and scratch boxes. “It’s definitely created a better environment for the birds, which leads to better feed consumption, increased egg production and decreased mortality rates,” Jennings says.

Early advocacy interest
Off the farm, Jennings showed an early interest in attending and participating in professional and public events put on by Egg Farmers of Nova Scotia. “I love to talk to people, inform them and reassure them about eggs and explain how eggs we make get to their place,” Jennings says.

“The most common question or concern I hear from people is they think eggs sold in stores aren’t fresh. I assure them that eggs get to the store in two to seven days and the expectancy is several months if they are kept refrigerated. I tell them eggs don’t have an expiry date – but they do have a best before date.”

“I also tell people who ask about animal welfare how happy our hens are. I also say they are locally produced and that the old myth about cholesterol is just that – a myth.”

One notable discussion Jennings has had about egg farming in Canada and his family’s innovative operations is with Prince Charles and Camilla, the Duchess of Cornwall.

Jennings met the royal couple during their visit to the Seaport Market in Halifax over the Victoria Day weekend in 2014. “It was a great honour,” Jennings told a journalist at the time. “I was shocked to be asked to talk with him. It really was special.”

Jennings later joined Egg Farmers of Canada’s young farmers program, which helps to connect young producers and train them to be industry leaders and advocates.

He calls the meetings, webinars and workshops at the heart of the year-long program a “great opportunity” for young producers to meet and share knowledge, expertise and experience with their peers and to learn about the many segments of the egg industry from leading experts.

He also credits the program with galvanizing his desire to promote the egg business and with boosting his communication skills and confidence. “I love getting out there to promote the goodness and health of our industry,” Jennings says. “I see egg farmers as being part of a big family.”

In addition to public advocacy, the Jennings are also well known to faculty, staff and students at the century-old agricultural campus of Dalhousie University in the village of Bible Hill, a 15-minute drive from the Jennings’ farm.

“We host tours of teachers and students and other people or groups from the community,” says Jennings, who now owns and lives in his family’s farm house with his girlfriend, Rebecca Smith, while his parents and grandparents live just up the road.

“We’re very happy and proud to show our farm and the clean and healthy environment our hens are raised in.”

Eyeing new ventures
According to Jennings, he and his father are now working on plans to build a new barn that would be equipped with solar panels on the roof.

“We’re looking at it right now,” says Jennings, who likes to buy and fix up old trucks – including a monster truck he built to ride in mud bog events. “Our windmills are getting older so we need to add to our power needs by adding solar panels to the new barn. Solar is quite expensive. But it could be a good investment in the long run.”

For Jennings, the barn project is a continuation of the innovative, dollars-and-sense approach that his family has always taken in regards to egg farming.

“We’re always looking for ways to be more efficient,” he says. “But there’s more to it that. I get great pride from having grown up working with my dad and my grandfather, who’s in his late 80s and still going strong.

“Everything I know I learned from them. Our farm wouldn’t be here if it weren’t for their hard work and passion.”

Working with family, he added, brings both rewards and challenges. “But I honestly can’t imagine doing anything else than this. This isn’t a job. It’s a lifestyle.”