David Newcombe has returned to the farm after finishing business studies and is the 10th generation of the family to farm. 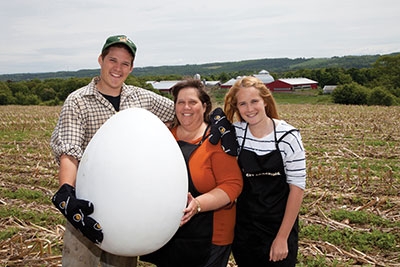 David Newcombe, his mother Geneve and sister Kathleen in a promotional photo for the Nova Scotia Egg Producers. David has returned to the farm after finishing business studies and is the 10th generation of the family to farm.

There are not many Canadian poultry farms that can boast of being a ninth-generation family farm. However, Cornwallis Farms Ltd. in Port Williams, Nova Scotia, has that distinction.

Cornwallis Farms Ltd., owned by Geneve and Craig Newcombe, in partnership with Craig’s brother Brian, is located on part of an original land grant given to the family more than 250 years ago.

In 1761, the Newcombs (now spelled Newcombe), New England Planters, migrated to the Annapolis Valley to farm the fertile lands cleared by the 1755 British expulsion of the Acadians. Deacon John Newcomb received a land grant in the region known as Cornwallis, and he and his two sons, Eddy and John Jr., began farming in what is now known as Port Williams.

Geneve and Craig have three children who will now make it a 10th-generation family farm.

Their eldest son, Robert, 24, is a Nova Scotia Agricultural College and Dalhousie University graduate, who is employed as an industrial engineer with the Barrington Consulting Group in Halifax.

He is also enrolled in an MBA program at St. Mary’s University, and although not on the farm, he lends his engineering expertise to it when needed.

Their daughter, Kathleen, 18, graduated from high school in June, and this September she will attend Acadia University in its Bachelor of Kinesiology program. She wants to be a sports therapist or physiotherapist. Back on the farm, she collects eggs on weekends.

They grow corn, wheat, soybeans and forages for their dairy herd and “we are currently experimenting with Fava beans in order to reduce the amount of off-farm protein sources we use,” says Geneve.

They run an on-farm feed mill that is producing TMR for dairy, layer and broiler feeds, making approximately 3,500 tonnes per year. “We also have an on-farm extruder which allows us to process our own soybeans,” she says.

The Newcombes also have an environmental farm plan, instituted in 2003, and a nutrient management plan (NMP) completed in 2006. Geneve states: “We feel that we have been able to reduce our farm’s environmental footprint in a number of areas.”

They accomplished this, she adds, through the use of no till, crop rotation, cover crops, plus the NMP which enables them to use only the required inputs on the soil by weighing all their manure, thereby managing nutrient inputs to match the needs of the crop being grown.

They also fenced all their streams to keep out cattle and created wetlands with cattails to treat wastewater. As well, the Newcombes bought a plate cooler to recapture heat from milk and wash water, plus converted their farm to LED lighting to reduce power consumption, along with the weigh scales and grain dryer extruder.

Moreover, they have adopted a GPS for their cropping practices. “We are always looking to our efficiency,” says Geneve.

“We do not have an official, documented, farm business plan; but we are always meeting as a family to discuss our goals and objectives.”

Their current priorities are the transition of the farm to a 10th generation and increasing its self-sufficiency through expanding its land base through land purchase.

The Newcombes have seven full-time employees, aside from the family: two work primarily with the dairy herd, three mainly with the broilers, and one each with the layers and with the on-farm mechanical services.

For managerial responsibilities, Craig oversees the broilers, layers and feed mill, while Brian manages the dairy herd and cropping. Says Geneve, “I look after the farm financials and the record keeping for the layers and broilers. I have also developed an employee manual along with standard operating procedures for the farm, and I am currently working on farm safety.”

Their second son, Dave, will co-chair Nova Scotia Eggs’ Run for the Cure Team this fall.

Geneve admits she now has, “a new level of time commitment,” but, she contends, the new demands on her time are fairly easy to accommodate, “as I spend a great deal of time in the farm office, so I can easily answer calls and respond to emails.”

She comments: “I was always a very involved mother; so, as my children have gone out on their own, it has freed up my time to take on this new role.”

She feels fortunate to have an experienced, dedicated NSEP staff “as well as a very knowledgeable and committed board, so there is a great deal of support and experience to draw from.”

Geneve says the NSEP directors have a strategic plan for direction. “As a board we were very pleased to announce a New Entrants program this year and feel it is a strength of our industry and shows how supply management can, and has evolved over the years to, encourage new entrants to our industry.”

This past year, following the example of the Egg Farmers of Canada (EFC), she says the NSEP has found opportunities to engage and train young farmers. “I am quite excited with the results. We have a wonderful resource in our youth and we gain as much as they do from these opportunities.”

She attends EFC’s national meetings as an alternate delegate representing the NSEP. “Our Nova Scotia board has made a practice of electing the Chair as the EFC alternate so they can stay abreast of national issues.”

Asked how safe and secure she feels supply management is, she replied: “Our provincial and federal governments have both publicly stated that they support supply management. Supply management is a system that has proven itself and the number of young people choosing to farm in supply-managed commodities demonstrates that the system still works.

“It is not a system that we should take for granted. So, as farmers, we must continue to voice our support for our system and educate others.”

Geneve has also provided active leadership in local amateur athletics as President of the Valley Girl’s High School Hockey League, Vice-President of the South Conference Female Hockey Federation, a director of East Kings Soccer and a manager of a number of sports teams.

Similarly, this past year, Craig coached both high-school girls’ hockey and soccer and is currently coaching East Kings Under 18 girls’ soccer. He is also a Commissioner for the Village of Port Williams.

Daughter Kathleen has also been very active in amateur athletics, taking part in soccer, rugby, hockey, wrestling and cross-country running.  For the past two seasons she has also been a volunteer coach with the Acadia sledge hockey team.

Eldest son Robert, this past winter, coached the Atom A Halifax Hawks hockey team, which won the provincial championship. He also plays Senior Men’s soccer, as does his brother, David.

For her own recreation Geneve likes to swim, sew, quilt, do fine needle arts, and she keeps a scrapbook on the history of the farm “as well as ongoing initiatives and events.”