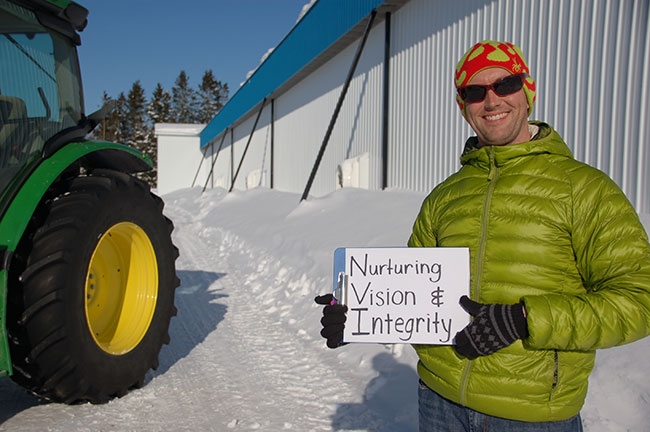 Not even record snowfall in New Brunswick this winter could wipe the smile from young farmer Aaron Law, shown here at the site of the family’s new layer barn, set to open in September.

For Aaron, an engineering technologist, farming was not in the game plan until five years ago when he left his engineering career. “I wanted to get my hands dirty and found the farm was a good fit,” he says.

The big change, however, would take a few more years to really happen. “I realized I was sitting on the fence and soul searching if it was the right fit for me,” Aaron says, as he describes going through the daily motions yet not really taking the full step into the family business during those first years at home.

In November 2013, Aaron started meeting bi-weekly with Nick Pereira, a personal performance coach in Saint John. As an impartial confidante and entrepreneurial mentor, Aaron’s coach helps him push boundaries and limits to grow and be more efficient.

“Personal coaching is a lot like a computer,” Aaron describes. “It’s like getting bogged down with pop-ups and viruses, so you do a reinstall and reprogram it – only instead of a computer, you do this with your mind and thinking.”

“I became aware that I was allowing my fears to control my life,” Aaron explains, noting fears about his ability to manage the farm, and that the farm would control him. What enabled him to make the decision was a huge shift in thinking, and a change in perspective.

A vision and goals
“I realized that I am in direct control of shaping my business and life however I choose,” Aaron says, adding the key is clear visions and goals. “And I mean very clear, right down to the sounds, sights and emotions,” he emphasizes. “And from there, comes committed action toward that vision.”

Since his awakening of sorts, Aaron and his parents have developed a formalized succession plan. Aaron is now a managing partner in the business and will continue to assume more management responsibilities from his parents, as well as transition to sole ownership.

“I have great respect and gratitude for this opportunity to farm with my parents,” Aaron says. “I’m fortunate they are really grounded people who are progressive and open to working with me.”

Currently the family houses their 28,000 hens in two layer barns. They also have a pullet barn used to grow their own ready-to-lay hens, which are bought at a day old. An on-farm feed mill helps the Laws trim feed costs and ensure quality control.

Until the mid-1990s the family also had a hatchery, breeder flock and grading station. But because of costs to upgrade equipment, maintain certifications, and retailer wishes to deal with fewer and larger suppliers, the Laws opted to let these aspects of their business go. Since 2006, they are among the original shareholders in Maritime Pride Eggs.

In looking ahead, the family has also adopted a new registered trade name: Laws Horizon Egg Farm. Officially, business will still be under H. Law & Sons Ltd., as it has been since the 1970s.

Committed action
On September 29, 2015, the Law family will move their hens into a new barn currently under construction.

“We’ll house the entire quota under one roof, all at the same age,” says Aaron. He also details how they’re now extending laying and adjusting their pullet rearing from the current six month flock rotation schedule in the existing two barns, one of which has now been decommissioned. At 31,000 capacity, the new barn will also have room to grow.

The switch from conventional housing to furnished housing will also be made. “It will nearly double the space per bird and give them more space to express natural behaviours,” he says, noting they are building to the same standards currently legislated in the European Union with 24 birds per enclosure.

Automated feeders, lighting, manure belts and egg collection will contribute to a significant reduction in power consumption thanks to more efficient motors and less of them required. The new technologies will also facilitate labour efficiencies. “We have two fulltime employees now,” Aaron says, both with 30 and 40-plus year tenures who will transition to retirement in coming years.

As part of the ventilation and manure drying system, a heat exchanger is being installed. Fresh air from outside will be forced onto the manure belts and the drier acts as a heat exchanger too. In winter, this will be especially helpful to heat the incoming fresh air and it will allow for host of other advantages like reduced ammonia and fine dusts.

“We really did our legwork planning for this barn,” Aaron says, with visits to layer farms in Nova Scotia, Quebec and Saskatchewan. His dad, Gailand is project manager for the construction, which allows Aaron to focus on managing the current hens and pullets for the transition.

“This project symbolizes a new mindset for our business going forward,” he says. “We’ve taken our time to plan this, and while an expensive undertaking, it will have so many payoffs.”

From a line of visionaries
Aaron follows in the footsteps of two generations of farmers very active in advancing their industry.

His dad, Gailand was chair of the Egg Farmers of New Brunswick for 16 years until 2013. Aaron’s grandfather, Harry, was a founding member of the Canadian Egg Marketing Agency (now known as the Egg Farmers of Canada), and contributed to the development of today’s supply managed system for eggs in Canada.

It was Harry and his wife Mildred that started the family’s farming tradition in the 1930s, with a mixed farm of fruits, vegetables, livestock and eggs. He then realized his knack for producing high-quality eggs and focused the business, creating the foundation that Gailand, Carol and Aaron build on today.

Looking ahead, Aaron plans to give back to the industry that has been so warm and welcoming. With 17 egg farmers in New Brunswick, he is willing to do his part. He is also sharing his experiences with personal performance coaching and helping others with tangible tools to push limits and realize their full potential.

He’s a board member on the New Brunswick Young Farmers Forum. A chance meeting at the Canadian Young Farmers’ Forum meeting in Calgary also introduced him to the Egg Farmers of Canada Young Farmers Program. Through the Egg Farmers program Aaron has been busy participating in regular training courses, including a focus on media training, cost of production, government relations, and industry dynamics.

“This program has given me a huge advantage and kick start in better understanding our industry,” Aaron says, encouraging other young egg farmers to inquire about joining.

At 38 years of age, Aaron feels more alive than he did in his 20s. He’s keen to make the most of his vision and goals with tangible tools to innovate and grow the family farm.

And in doing so, you can bet he’ll continue to empower himself, and empower others.