What it is, why it occurs and what to do when it's suspected. 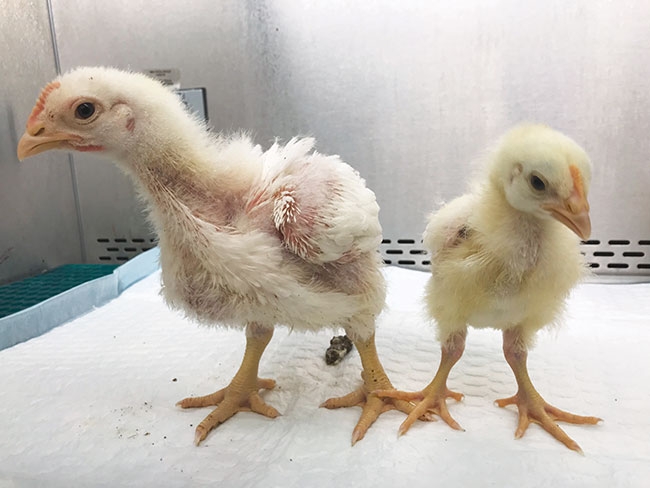 Low uniformity and delayed growth in a flock can have many causes and contributing factors. Are these problems in your barn? Are they recurrent in specific barns despite changing feed or breed?

There are a number of non-infectious potential causes of poor uniformity and delayed growth that exist, including faulty poultry genetics, management and nutrition to name a few.

One of the most important causes in recent years is a disease syndrome known as runting-stunting syndrome (RSS). In this article, we explain what RSS is and describe some contributing factors as well as some practical control strategies producers can implement in the field.

What is RSS?
Recognized since the late 1970s, this syndrome has had many names besides RSS, such as brittle bone, helicopter-wing, malabsorption and pale-bird syndrome. All of the many names of this disease are highly descriptive. “Runting-stunting”, for instance, is formed by “runt”, which in poultry refers to the smallest animal in the barn, and “stunting”, which is an impairment of the expected growth of an animal.

Sick chicks show diarrhea, feathering problems, low weight, elevated feed conversion and depression. Because of the watery droppings, the litter quickly becomes damp and birds may be observed to be dirty in the abdominal area.

Upon necropsy, these affected birds have small livers with enlarged gallbladders, and they have gas-filled dilated intestines with thin walls. It is generally recognized that RSS is caused by co-infections of multiple viruses – such as rotavirus, astroviruses and reovirus – that can be vertically or horizontally transmitted.

Researchers have yet to study the influence of recent emerging variant Avian Reoviruses (ARV) on RSS. These emergent ARVs have been linked primarily to viral arthritis (VA); however, VA-affected flocks are routinely found light in weight and, in some RSS field cases, viruses with 100 per cent identity can be found in the intestine and tendon (Cluster 3).

In an unpublished study conducted at the University of Calgary-Careem’s lab, with a Cluster 5 ARV obtained from a case of VA and inoculated in broilers chickens at day of age, a syndrome with characteristics of RSS was observed in the challenged groups. In this case, a Cluster 1.1 ARV, highly similar to the 1733 vaccine strain (a strain causing RSS-like clinical signs), was isolated from the negative controls.

This Cluster 1.1 ARV was also isolated from the affected birds along with the challenge virus. It is likely that this virus was vertically transmitted and interacted with the Cluster 5 ARV to produce RSS-like clinical signs (e.g., low weight, depression) along with sudden death (See Figure 1).

Duodenum microphotographs show a severe villous atrophy in some birds from the challenged groups. Damage to the gut will contribute to poor nutrient absorption and other factors, leading to delayed growth and poor flock uniformity. Reproduction of the observations with the isolated virus will be attempted in future experiments.

When and why does RSS occur?
Multiple viruses have been obtained from birds affected with RSS, including rotaviruses, astroviruses and reoviruses, which can be horizontally and vertically transmitted. Although a few characteristics of RSS have been replicated with some reoviruses and astroviruses under experimental conditions, the consensus is that the disease is caused by a combined viral infection rather than a single virus infection. All bacterial candidates for RSS have failed to reproduce the disease. Usually it occurs sporadically, with increasing severity in a particular barn.

What do I do if I think I have RSS in my flock?
There is no treatment for this disease. Producers can limit economic losses with good management practices (e.g., proper brooding temperatures) and by culling the affected birds, which will not recover from the disease.

As the disease can be reproduced with contaminated litter obtained from affected farms, it is clear that the litter is infectious and will cause the disease in future placements.

Removing or treating built-up litter, treating affected houses during downtime with heat and providing more downtime will decrease the severity of the condition in the next production cycle.

In short, a diligent cleaning and disinfection process is crucial to diminish the economic impact of the disease. Otherwise, it is highly likely that the disease will affect your next flock.