Target the Virus, Not Immune Response

Current research proposes activity of H5N1, not immune response to the virus, key to the virus’s disease-causing capability 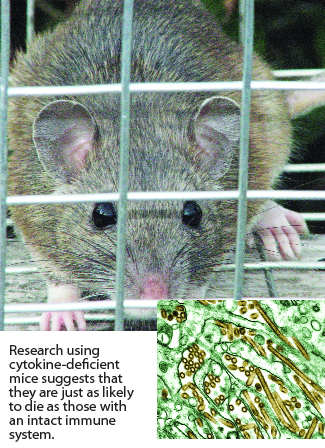 The study, done in mice genetically engineered to lack critical immune system chemicals called cytokines, found these mice were as likely to die from H5N1 infection as mice armed with an intact immune system.
That suggests the activity of the virus, not the immune response it induces, is the main driver of the disease process, said the authors, from St. Jude Children’s Research Hospital in Memphis, Tenn.

As such, it is evidence that a phenomenon known as a “cytokine storm’’ – a massive and cascading production of immune system chemicals that actually damages the host it is meant to protect – is not responsible for the astonishing death rates seen in H5N1 infections.

“These results refute the popular paradigm that the cytokine storm is the cause of death during H5N1 infection,’’ said the researchers, led by influenza guru Dr. Robert Webster.

Dr. Menno de Jong, who has treated H5N1 patients in Vietnam, concurred with the findings, which were published July 16th in the journal Proceedings of the National Academy of Sciences.

“This is a viral disease and you should treat with antivirals,’’ de Jong, who is based at Oxford University’s Hospital for Tropical Diseases in Ho Chi Minh City, said in an interview from Amsterdam.

“That’s the cause of the disease.’’

The severity of illness caused by the H5N1 virus  which has killed 60 per cent of the people known to have been infected with it has led some in the scientific community to hypothesize that infection actually triggers a cytokine storm in these patients.

That in turn has prompted scientists to explore the possibility of treating H5N1 infections with drugs meant to tamp down the immune response – things like cholesterol-lowering statin drugs and even some immune suppressing chemotherapy drugs.

But others, like de Jong, have argued that the high cytokine production seen in H5N1 disease may instead be a reflection of the fact that the virus replicates to higher levels and for longer periods than is seen with regular flu strains. If that’s the case, they say, tinkering with the immune response could actually allow the virus to do worse damage.

“If you would have a patient with H5N1 infection and the virus damages the lungs by itself, and you would give them an immuno-suppressant treatment, that would give the virus the liberty to just go ahead and replicate,’’ de Jong said.

“Somewhere in the course of disease the immune response certainly can give some additional damage. And maybe cytokines are important for that…. But this is a very virulent virus by itself.’’

The three groups of genetically engineered mice were then exposed to H5N1 virus. Unmodified mice were also exposed so the response could be compared. In each case the death rates of the modified mice and the regular mice were similar.

“These results demonstrate that inhibition of the cytokine response to infection with highly pathogenic H5N1 influenza virus is not sufficient to protect mammalian hosts from death,’’ the authors said. n
SOURCE: Canadian Press