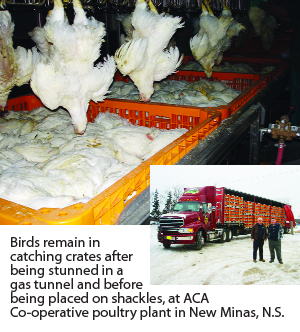 The installation of a Linco Maxi Load, complete with Controlled Atmosphere Stunning and Linco Vision Grading equipment, has brought the ACA Co-operative Limited poultry plant in New Minas, N.S., “one step closer to becoming a world-class lean organization,” CEO Sue Payne told guests at an official opening ceremony and open house on May 26.

“The vision grading and controlled atmosphere stunning systems (CAS) are the first of their kind in North America and the CAS is recognized as the most humane system available to process live poultry in the world today,” Payne said.

The new equipment has streamlined the live bird handling process and greatly improved worker health and safety in this area of operations, she said.

The only remaining poultry processor in Nova Scotia, ACA has invested $7 million in equipment and buildings at its New Minas location over the past year.

The investment addressed humane treatment of birds in the catching and stunning operations and many working conditions of employees throughout the plant.

Equipment Installed
Some of the larger items installed include the Linco Maxi Load system, new trailers and modules, and forklifts for the barns and acclimatizing building at the front end of the plant (live receive and kill room); the Linco CAS in the acclimatizing building; and a semi-automatic transfer, vision grader, compact weigh and transfer, inside/outside bird washer, and turkey cropper in the pack room.

CAS Stunning
The controlled atmosphere (gas) stunning process was developed through years of experimentation and testing, following concerns about existing methods of processing poultry voiced by animal welfare groups in Europe in
the 1980s.

In CAS stunning, birds remain in catching crates that travel through a gas tunnel. After being stunned, the birds are placed on shackles. Stunning the birds in the transportation containers eliminates live bird stress in unloading and handling at the processing plant.

Other benefits of the CAS process include reduced carcass damage; reduced worker stress, as the birds are not fluttering while being placed on shackles; improved work environment, due to less dust, dirt, and noise and better lighting; fewer blood spots in the meat, resulting in improved meat colour; and improved quality of meat, due to less damage from handling.

Processors in North America have been slow to implement the CAS system, despite its benefits, because they have not had the same pressures from animal welfare groups as in Europe and the equipment is highly capital intensive.

Animal welfare groups on this side of the Atlantic, however, are becoming more active, making the public more aware of food processing methods.

ACA decided to partner with Linco and install the CAS system.  Peter Goffe, chief operating officer of Linco Food Systems Inc. says that the CAS system is being utilized at several turkey processing plants in the U.S., but that ACA is the first to use the system for broilers in North America.  Goffe says that the first system Linco installed was in Germany in 1998 and that the demand is growing in both Europe and in the U.S.

He says that Linco’s gas stunning system has proven itself on the market and offers a host of practical advantages to improve handling efficiency.

ACA will be using the CAS system for both broilers and turkeys.  ACA also added the Linco live receive modular catching system to complement the gas stunning. In addition, ACA built an animal welfare holding facility where birds are acclimatized before processing.

Carbon dioxide is the gas used in the stunning system, since it is directly involved in the respiratory exchange. The gas concentration increases with the depth in the tunnel, from 5-10 per cent right below the floor to a maximum of 50 per cent at the bottom. This allows for a gentle stunning process and the birds remain fully stunned throughout the neck cutting and bleeding process.

After being uploaded at the live bird reception bay, the Lincoload or Maxiload crates are processed through the gas-stunning tunnel. This means that the birds remain in the crate from the time they are loaded at the farm until they are stunned in the CO2 tunnel.

“We are seeing the benefits of better quality meat resulting from the new system. And due to improved catching methods, we are seeing less bruising and a higher number of Grade A birds,” Payne said.

Better quality meat, with fewer blood spots in the breast, thighs, and wings, and less bone breakage also have been reported.

“We will continue to invest in new technology and training of our people in order to provide the producers of poultry in Nova Scotia a competitive plant to process their birds and the consumer, high quality, safe Nova Scotia poultry products,” Payne said.

“We have a commitment to our employees, producers, immediate community, and the province of Nova Scotia to continue to employ Nova Scotians. Our owners are poultry producers who live and work in Nova Scotia.”
Located in the Annapolis Valley, ACA has been processing poultry products since 1943. The co-operative employs 650 people in various sites throughout Kings County, with annual sales of $100 million.

Chicken, turkey, and egg products bearing the EdenValley Farms brand can be found in retail stores throughout Atlantic Canada. n