In an effort to show people what really goes on behind those closed
poultry farm gates, the British Columbia chicken industry has now
created a mobile demonstration barn. 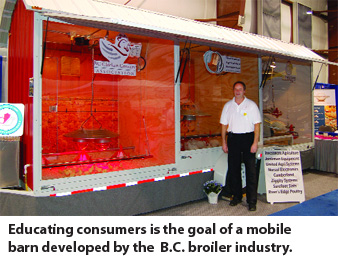 In an effort to show people what really goes on behind those closed poultry farm gates, the British Columbia chicken industry has now created a mobile demonstration barn. The barn made its debut at the Pacific Agriculture Show (PAS) in Abbotsford, Feb. 15. Since most chicken growers do not attend the PAS, many of them got their first look at the new barn at the B.C. Chicken Growers Association annual meeting in mid-March.

A joint project of the B.C. Chicken Growers Association and the B.C. Broiler Hatching Egg Producers Association, the $35,000 cost was partially funded by the Investment Agriculture Foundation. BCCGA director Art Penner not only co-ordinated the project but did most of the construction and equipment installation (with a little help from fellow BCCGA director Gord Esau).

“We didn’t get the basic frame till mid-December so it took some intensive work to get it ready in time for the show,” Penner said.

Although he had long advocated the idea, the two associations really jumped on board after the avian influenza outbreak.

“There are a lot of myths out there and we need to be able to show people how it is,” Penner says, noting biosecurity protocols make the farms themselves off limits to visitors.

Penner designed the “barn” from a picture of a similar unit owned by Chicken Farmers of Ontario. It is divided into three units, one with day-old chicks, one with full grown (37-day-old) chickens and one with broiler breeders. Each unit uses the same equipment found in most commercial barns and uses a view of a corresponding local barn as a backdrop. The barn has its own generator, lights and heat and could house birds for up to a week if necessary.
“All we need is water,” Penner states.

The industry is now looking for a student or retired farmer to take the barn to fairs and other events around the province as well as work with B.C. Agriculture In The Classroom. It should be in great demand, Penner noting he received three requests in just the first eight hours.

AITC executive director Lindsay Babineau called the new barn “absolutely wonderful, saying it will fit perfectly into the curriculum, a key to getting demonstrations in schools. n