Egg producer committed to quality and safety while embracing innovation. 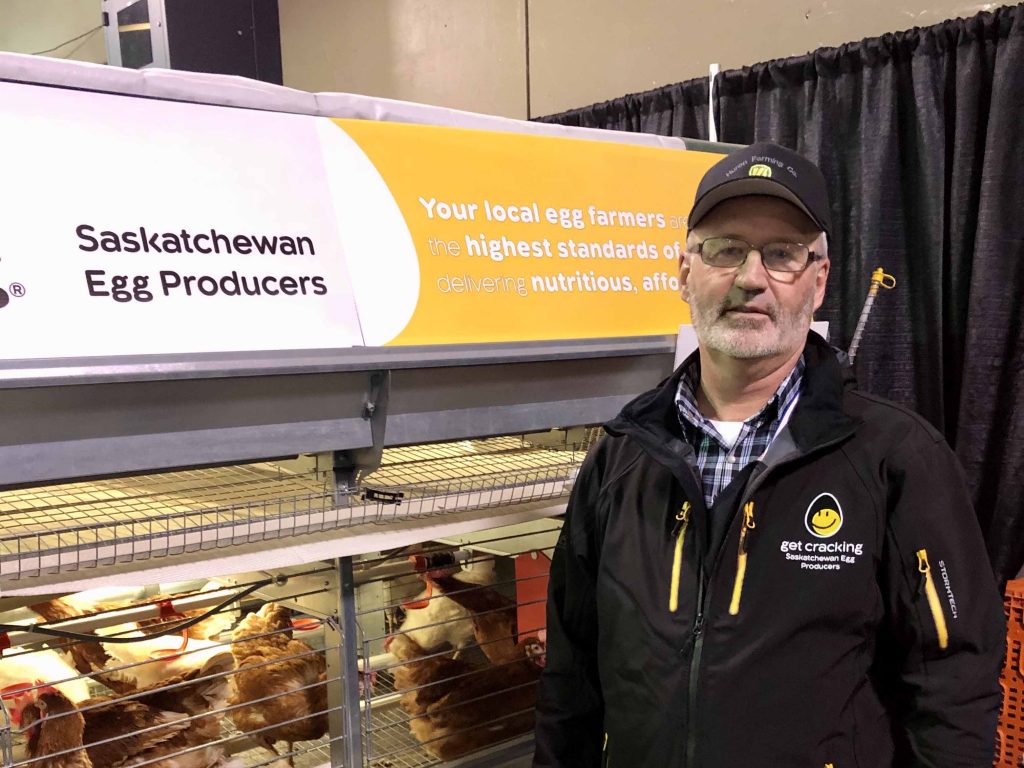 Ben Entz, pictured here at Agribition in Regina, has been managing Huron Poultry on Huron Hutterite Colony for over 30 years with an impeccable record.

There’s nothing Ben Entz likes more than a good challenge. It is what he loves most about being an egg farmer and perhaps what makes him so good at it as well.

Entz has been managing Huron Poultry on Huron Hutterite Colony near Brownlee, Sask., for over 30 years now. The colony had moved to the province from Alberta in 1969. At the time, the colony had a 4,200-bird flock and someone else managed the layer barn.

When Entz took over in 1989, they were raising 5,000 layers in an old stair step Big Dutchman caged system with a manure pit. Five years later, the colony shut down their hog business and converted an old sow barn into a new layer barn. Slowly, he worked the flock size up to 16,000 birds, buying some quota, but leasing the rest from farmers who had quota but not enough space.

At that time, producers made agreements without board involvement. “We were one of the first ones to do this leasing,” Entz recalls.

“I can’t remember anybody else doing this for quite a number of years.”

Today, however, leasing contracts go through the board. Currently, Huron Poultry has quota for 19,000 units, but actually manages a flock of 30,600 birds. They leased additional birds through the leasing pool.

While there’s no way of knowing what will be available year to year, Entz doesn’t worry too much because the farm has its own grading station. “We basically grade what we need and the rest is shipped to Star Egg, our main grade in Saskatchewan,” the producer says.

To do this, Entz runs two lines of cartons: their own Huron cartons and a fine food carton.

At one point, Entz says Huron Poultry had contracts with all of the fine food companies in the province. Over time, though, market demand outpaced what they could produce and Star Egg took over some of the contracts. Today, the farm sells most of their eggs direct and then delivers the rest to Star Egg.

Innovative new barn
Much has changed since Entz took over at the farm. Last summer, they opened the doors to their newly constructed layer barn. The facility is equipped to hold 60,000 birds, although it’s nowhere near capacity right now. The ventilation system and everything else in the barn is equipped to scale up over time, as needed.

The barn is also equipped with a solar wall, a dream of Entz’s for many years. “I always had it in the back of my mind,” he says. “If I was ever to build a barn, I would put the solar wall on the barn.”

While many people see the solar wall and assume it’s for electricity production, it’s not. When the sun hits the perforated paneling, it heats up. That warm air is sucked into the attic where it warms the air used during the winter for ventilation. Even when it’s as cold as -40°C outside, the air in the attic can be warmed to -10°C. Saskatchewan is perfect for this type of technology, Entz says, because despite its extremely cold temperatures in winter, days are often sunny and bright.

The ventilation system is called DACS and it comes out of the Netherlands. Instead of using a side or ceiling inlet, it sucks air from the attic through a Corona inlet. It also sucks air away from the birds. Using air from these two points means there’s no ice buildup between warm and cold regions – even in extremely cold temperatures.

“It’s pretty interesting to monitor,” Entz says. “I expected a little bit of frost. There was virtually nothing.”

Prioritizing feed quality
Another challenge Entz took on after taking over the farm was improving feed quality. Six years ago, he started buying raw soybeans, which he would then put through an extruder. The extruder essentially forces the beans through a grinder at high temperatures. This cooks them in a way, and helps to break down fibrous tissue that would otherwise cause digestion problems in the birds.

Soybean contains about 19 to 20 per cent oil. This oil is left in the bean during the extrusion process and what remains is full-fat soy that provides the birds with a rich, balanced diet that’s high in energy and protein.

“Everything is almost down to the grain now,” Entz says. “The feeding has come a long ways over the years.”

Huron Colony has ventured further and now makes its own canola meal as well. In fact, the feed side of the equation has been so successful that it’s turned into a full-time operation that creates quality feed ingredients for mills.

Committed to the craft
Beyond bird nutrition, Entz strives to keep his birds safe and healthy – and he has an impressive safety record to prove it. Since it was implemented, Entz says Huron Poultry has received a score of 100 per cent on at least 10 Start Clean, Stay Clean audits. This is the result of diligence and vigilant recordkeeping.

The new barn was designed with improved food safety and biosecurity in mind. Guests are welcome to purchase eggs on-farm as long as they make use of biosecurity mats and stay in the unrestricted zones. Restricted zones are clearly divided and visitors and staff have to physically step over a barrier to change into coveralls and barn boots. Entz says the bench serves as a reminder to heed biosecurity measures – and it works.

Entz enjoys the day-to-day challenges that come with egg farming. “The whole thing is a challenge,” he says. “You never can say you know everything. There’s something new every day.”

A true asset
Off the farm, Entz has offered his time to educate the public about poultry farming at Agribition in Regina. While visitors check out the small-scale enriched housing systems for some 30 to 40 hens, Entz explains how the system works and its benefits for the birds. He enjoys interacting with the public and meeting new people.

Cam Broten, executive director of Saskatchewan Egg Producers, has known Entz for years. They have worked together at off-farm events with the public, including Agribition.

“Ben is a skilled egg farmer and he’s a true gentleman,” Broten says. “He’s a real asset to our industry.”

“He’s skilled at reaching out to the public and communicating what he does and shows a real passion for the job of providing good nutritious eggs to the consumer.”