Work continued through the holidays and our equipment arrived all the way from Laer, Germany. 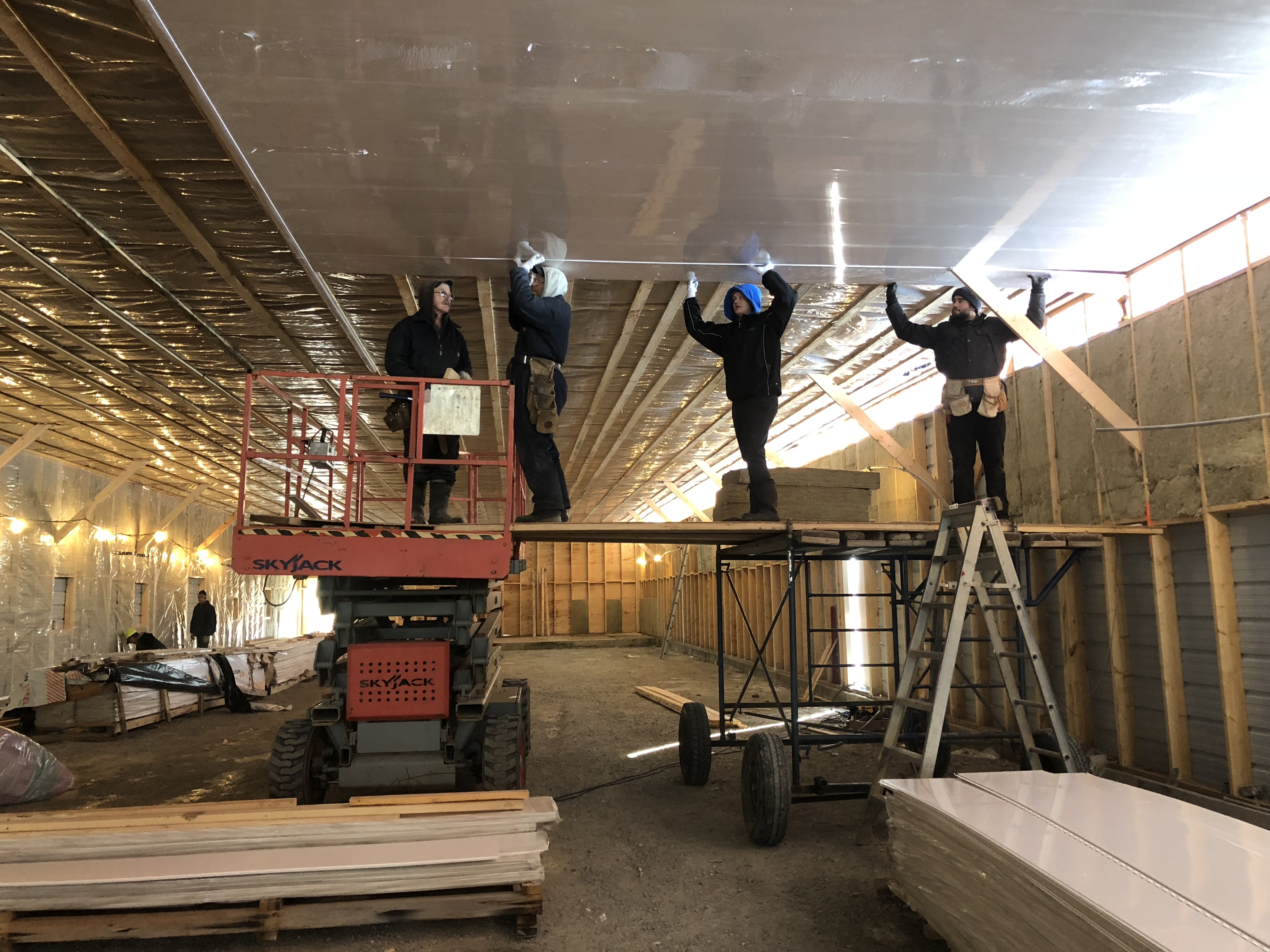 My fifth blog starts off at the New Year.

Christmas gives those of us in agriculture time to enjoy faith, family, friends and farm. As holiday festivities took over between Christmas and New Year’s, we had minimal time to make any progress.

Many businesses have limited holiday hours, and employees take time away from their jobs, including our construction crew. It ended up being too cold to work anyway.

But we continued to care for our hens 24/7. Our kids, Charlotte and John, returned home for the holidays and they helped out as well.

Back to our new enriched housing project.

Last April, we met with Harold Meadows of Clark Ag Systems. Together, we decided to go with the Farmer Automatic Enriched Colony Housing system for our new layer barn.

At that time, you must decide on a date to have the equipment arrive at your farm.

It comes from Laer, Germany packed in Maersk containers, travels by ship to Montreal, by rail car to Brampton, Ont. and then goes through customs. Finally, it arrives at your farm via transport truck.

We had originally (optimistically and probably naively!) picked a delivery date in December, but later changed that to January 2nd.

In November, we realized that we would not need the layer housing equipment until perhaps February and wanted to postpone the date.

This was impossible. The company in Germany is very organized in filling the order and the container had already been loaded and was en route on the high seas.

Rarely are they wrong about timing, unless Mother Nature interferes!

We received one day’s grace and the first container arrived January 3rd.

Of course, this turned out to be one of the deep freeze weeks, with temperatures plummeting below -18°C.

Our loader tractor was first used to take each box, which sits on a pallet, to flatbed trailers that Nick had arranged to temporarily put the various packages on.

The loader tractor was having trouble working, and we started using the “Gradall” machine that B. Jorna Construction had on site to move lumber, etc. for the construction tasks.

The second container arrived in the late afternoon.

Between loads, the Masterfeeds truck brought feed and Nick came in for a break. I told him he was talking funny and asked him what was the matter. He said, “My face is frozen!” A hot chocolate helped to warm him up so he could smile again.

Charlotte and John cleared out what will be the new cooler in order to make a temporary holding place for all of the parts. This also gave the equipment a place to be protected from winter weather.

The various skids then got moved on January 4th to the cooler area.

The week of January 8th brought many visual advances: the Tile Red steel getting put on the east and west sides; insulation and white plastic was put on pack room walls; the scissor lift arrived to be used for high jobs; a vapour barrier was put on the barn ceiling below trusses and walls; and hurricane clips installed (did you know that each clip can withstand 1,100 pounds of uplift pressure?).

Our daughter Nicole helped install them – at least eight nails each on the base of the barn, lots of squats and no blue fingers when she was done.

During the rest of the month, insulation was placed on all walls, white vinyl planking was installed everywhere except the cooler and three to five lighting rows were installed.

As I write this blog, the facia, soffit and some electrical are in the works.

With insulation and walls of the large main barn almost completed, we moved all of the skids and boxes of housing equipment from the cooler to the back of said barn.

This was done on a warm, sunny day before snow returned near the end of January. The cooler still needs to be insulated, and its walls finished.

I repeat a previous comment that the animal care and egg gathering must still be carried out in the old barn.

Additionally, yearend arrived and this brings extra bookwork. I got a good start on the last quarter at the beginning of December, but then had to finish in January. I also am keeping track of the new barn costs separately for our own records.

I finished this on January 22nd and filed my HST rebate at 2:50 pm. This filing included the many barn build expenses thus far and was, of course, more work for me in a quarter than ever before. Our rebate was $17,000-plus higher than our usual filing with Revenue Canada.

We were having afternoon break and at 3:20 a Canada Revenue HST office employee called to inquire about the large jump in our rebate filing.

I explained what we were doing, and I believe initially he would have wanted me to forward some proof to him of our venture.

However, I also told him about the coming changes in the egg industry with respect to the deletion of conventional housing by 2035.

I told him he could read about what we were doing in my blog! He was very interested and was going to check it out. No further documentation was required of me. Yippee!

So, with Jack Frost nipping at our noses, we hope February sees less of Old Man Winter – not holding my chilly breath!