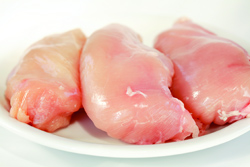 If someone was doing a recruiting poster for chicken and eggs it might read like the old U.S. Marine Corp pitch: “There is so much more you can be.”

While eggs have already come a long way with omega-3, they’re not going to stop there.

For example, Martin Zuidhof, of Alberta Agriculture and Rural Development, said understanding the seemingly obvious can lead to significant developments.

The seemingly obvious is that: “You are what your chickens eat.” The follow-up to that is that producers can add value to poultry meat through nutrition.

For example, through nutrition producers can reduce the amount of fat in chicken and, at the same time, increase the quality of the fat.

The result would be that you “differentiate your chicken to make it more valuable to your consumers.”

In economic terms differentiation allows producers to get out of the commodity trap. Commodities are large volume, virtually identical, products that deliver the same value to consumers and fetch the same price. To break out of the trap and to reap higher prices (and more profit) the idea is to make your product more valuable to consumers.

An example of this would be the difference between your run-of-the-mill car and a BMW or an Audi. Consumers are willing to pay more when they see extra value.

In the case of chicken, consumers see fat as a waste. Delivering chicken with less fat would be seen as better value, said Zuidhof. The way to do this is to increase the amount of dietary protein fed to chickens.

“The general rule is increasing protein in a broiler diet will increase lean yield and reduce fat,” he said.

Most important to accomplish this was the use of a pre-starter, which had the most sustainable lasting effect.

The study also found that a pre-starter and the protein level in the feed also slightly affected leg yield curve. It was noted that males had a slightly higher leg yield curve than females.

Another result was that higher protein reduced the fat pad yield curve while a pre-starter did not affect fatness.

Another study looked at feeding flaxseed to poultry to improve the quality of the fat.

This is not a new area of research, Zuidhof said. But this study tried to “optimize” the procedure.

The goal is to improve the quality of the fat by getting more omega-3 and less omega-6.

The downside of feeding flax is higher production cost. There is reduced growth rate, poorer feed conversion and reduced meat yield, in addition to the added cost of feeding flax.

The objective of the flax feeding project was to “determine the optimum level and duration of dietary flax seed required to achieve: consumer health benefits; consumer acceptance; acceptable functional properties of the meat; acceptable performance and yield; and acceptable cost of production.”

The study introduced flax seed into the diets at two levels – 10 per cent and 17 per cent.

The goal was to get omega-3 in the meat to above 300 milligrams per 100 grams of meat. At the high level of flax feeding (17 per cent) the desired level (the minimum level required for labelling) of omega-3 was reached in 12 days. At the lower level (10 per cent) the level was reached in 24 days.

The study concluded that an optimal strategy for producing and marketing omega-3 enriched breast meat would be to feed the high level (17 per cent) flax for 12 days.

Zuidhof said some back of the envelope calculations indicate that to offset the increased costs of feeding flax – which he estimated at 29 cents/kg or more – it would need to sell for about five cents per 100 grams at the deli counter.

“There might be a real marketing opportunity,” he said.

The bottom line is value can be added through chicken nutrition, he said.

Rong Tsao of Agriculture and Agri-Food Canada introduced himself to the Poultry Industry Council research day by saying “I’m a chemist” and admitting he knows next to nothing about chickens, but said he does eat an egg a day. From his scientific perspective he said eggs are “food capsules.”

The question for him was: Can these capsules go beyond their basic nutritional function and help reduce the risk of chronic disease or move into the realm of nutraceuticals and provide protection from chronic disease?

One area where this can apply is in soy isoflavones.

In the West, people are “concerned about is soy safety,” he said. “But even at high levels there are no adverse effects.”

There are also benefits. Asian populations consume an average of 20 mg/day of isoflavones compared with five mg/day for Western populations.

The increased levels of isoflavones result in a 29 per cent reduction in breast cancer and a recent study showed that high doses of soy isoflavone supplements (126 mg/day) improved bone density without severe adverse effects.

To get isoflavones into eggs a study was carried out feeding genistein to layers. The isoflavones are found in the yolks not the egg whites, he said.

There was no change in feed consumption or egg production during the study.
The study found that isoflavones can be incorporated very efficiently into egg yolks and there is a positive correlation between concentration and bioavailability.

“Isoflavone-rich chicken eggs are a good model for the development of so-called super eggs,” he said.

In the future researchers can look at other isoflavones, other phytochemicals and other super eggs/designed eggs, he said.