Could the broiler breeder industry succeed without skip-day? These two producers think so. 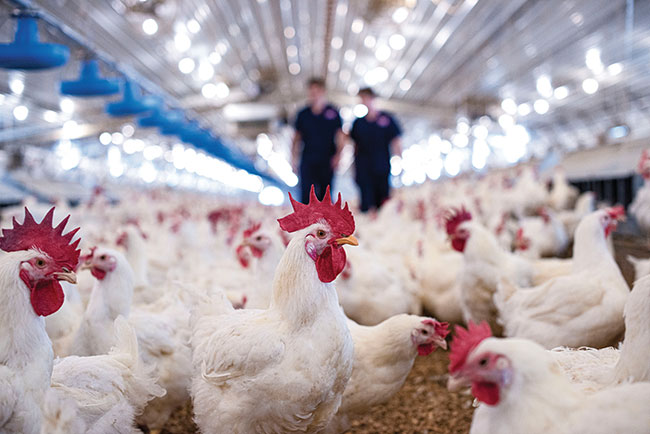 Skip-day feeding, the practice of not giving feed to broiler breeder pullets every day as a way to control growth, is still the norm in Canada, the U.S. and some other countries. Here in Canada, it’s currently an acceptable practice under the National Farm Animal Care Code (NFACC) for broilers. Due to animal welfare concerns, it is banned in the European Union.

Drew Black suggests the reason there hasn’t been more movement in Canada towards daily feeding is because it does not necessarily lead to better welfare outcomes.

“Each producer finds the management practices that is best suited to them and that they feel delivers the best performance, quality and bird health and welfare,” explains Black, who is executive director at the Canadian Hatching Egg Producers (CHEP). “Yet, of course, knowledge and practices are never static and are constantly evolving. Some producers find that daily feeding works best for their flocks, while others find skip-day delivers the results.”

CHEP has funded feeding research in the past through the Canadian Poultry Research Council (CPRC) and Black says it would support more in future. He adds that CHEP will “strongly support” the evolving science and accordingly propose any needed updates to the NFACC and the CHEP Animal Care Program.

There are at least two broiler breeder farmers in Canada who have done every-day feeding (EDF) for many years. They achieve EDF in somewhat different ways, but both report two major things: complete success and the attention of major broiler industry stakeholders.

Feed line cover and more
It was eight years ago that Innovative Poultry Group in Port Williams, N.S., switched to daily feeding. It is a co-operative that owns Synergy feed mill and broiler breeding operations and Maritime Chicks hatchery.

Gary McAleer, vice president of operations, says that “like others who use skip-day, we were having trouble with intussusception on feeding days because the birds got too excited. Also, on off-feed days, the pullets would scratch a lot due to hunger and stress. It would cause shavings to go into the chain feeders and jam them.

“Another issue we saw with skip-day is that when the birds are fed, the more docile ones don’t get enough feed. The more aggressive birds take most or even all the feed.”

McAleer decided to give EDF a go. He switched his pullets to a bulky fine-grind feed, did some feed line modifications and fed them in the dark, which he says keeps them calm. “I’ve watched them using low-light cameras,” he reports, “and they know exactly where the feeder is.”

Three years ago, he went further, designing a system that involves a cover for the feed line that’s lifted once the feed line is full. “It’s very simple and easy to install,” McAleer says. “It cost about $10,000, including labour. The birds all line up and they know that when the feed line motor stops running the cover will lift and they will all be able to have their meal.”

From the start, McAleer and his team also separated aggressive and non-aggressive eaters to different pens to further reduce competition. At day 18, each bird is weighed and those at the lower end (about 35 per cent of them) are moved to another pen. It takes about 72 man-hours for the team to grade a 9,000-bird flock.

Over the past few years, a lot of U.S. poultry industry people have come to see how McAleer achieves EDF success. “Cobb, in particular, has brought many people here,” he says. “I also did a presentation in 2019 at the broiler breeder and hatchery conference in North Carolina and I’ve shared videos. Everyone says they can’t believe how calm the birds are.” Innovative Poultry Group is not a CHEP member and McAleer says he’s had no contact with CHEP on this topic.

Beyond his operation’s own measures of success, McAleer has also received independent recognition. For the last four years in a row, he and his team have received the Flock Award from Cobb, a recognition of top-performing poultry operations in North and Central America that use Cobb genetics.

These awards, McAleer says, prove not only that EDF is doable but also that it produces excellent results. “I know it’s easier to raise broiler breeders on skip-day feed, but our company is proof that it can be done successfully with EDF.”

U.S. and Europe
In terms of adoption of different feeding programs in the U.S. broiler breeder industry, Chance Bryant, Cobb’s technical service director for North America, says, “We know as an industry that change is inevitable and we have to be willing to adapt and implement new approaches in management to maximize the health and well-being of birds. Learning new and better ways to feed pullets that will provide a more welfare-friendly environment is important to our industry. All indications are that Gary’s system is working well and this or something similar could be useful for us going forward. I would say 50 to 75 per cent of our industry has investigated either Gary’s or something similar, on a small scale.”

In Europe, one common method the broiler breeder industry uses to achieve EDF is utilizing spin feeders (a spinner on the bottom of a hopper) that spreads pelletized feed to the birds. For this method to work, a good-quality pelleted feed is needed.

The Cobb EU team has seen success with the program. 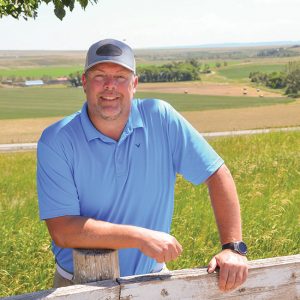 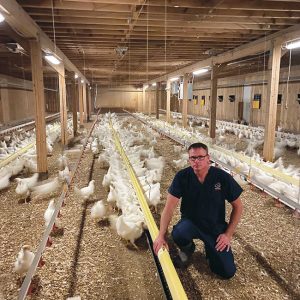 Gary McAleer switched to daily feeding in response to some challenges with the skip-day.

Lowering the feed line
Jeff Notenbomer, owner of Willow Creek Poultry in Monarch, Alta., uses an EDF method that also involves equal instant access to feed. He is currently chair of the CHEP Research Committee, the Alberta Hatching Egg Association and the Poultry Innovation Partnership, and a CPRC director.

Notenbomer has never used skip-day feeding, and neither did his father before him. “My father came into the broiler breeder industry from being a table egg farmer,” he explains, “and he just made feeding every day work, like he had for layers. I think if we ask the question of how to be a good broiler breeder farmer, the answer is that you make sure stress is low. Any stress on the broiler breeder takes away from her reproductive capacity. And delivering pullets a daily meal in less than two minutes really eliminates stress around feeding.”

Unlike McAleer’s feed line cover-lifting system, Notenbomer has raised feed lines that are lowered (in the dark) to bird level, and then the lights come on. “For it to work, you need to have 20 per cent more feeder space than birds,” he explains. “You also need to be there at every feeding to make sure the equipment doesn’t malfunction. You want to make sure any issue is dealt with right away so that the birds aren’t stressed.”

Notenbomer also feeds 25 per cent less than the Aviagen charts. “So, we have huge savings with that, but also stronger birds and much less disease than those who do skip-day feeding,” he says. “I think EDF pays for itself pretty much instantly.”

For those wanting to try EDF, Notenbomer recommends starting in the male barn and/or the spiking barn, where feed lines are shorter and you can install a lowering system and perfect the system before moving on to the pullet barns. The goal is to get all birds equal access to feed within two minutes.

“This is where extra feed space is important,” he asserts. “Birds need to find their spot on the feed line. If all the spots are taken, they start running around to find a spot. This running around stress needs to be limited as much as possible. If all the birds can find their spot with their equal portion of feed in around two minutes, that would be an A+ EDF system.”

In first trying the system in your male and/or spiking barn, Notenbomer says, “You’ll also see for yourself, before you do it with the pullets, how much less feed, how much less disease, how much stronger the birds are. I have seen research that shows what the stress of skip-day feeding does to the birds.”

Another U.S. perspective
In 2019, animal nutrition company AB Vista brought Notenbomer to Texas to share his EDF knowledge. This topic was requested by several of their customers, says AB Vista senior technical manager Dr. Tara York. These customers are among the top 10 broiler/broiler breeder producers in the U.S. In addition, one of them requested to visit Notenbomer’s operation to learn more.

York notes that both ensuring the birds are obtaining the proper nutrition and correct distribution of feed are important with an EDF program. “This may require changing the feeding systems within pullet houses along with how the birds are managed daily,” she explains. “The U.S. is also very cost driven, and the cost to feed pullets and transport feed every day will increase costs.” She adds that the current benchmarking system in the U.S. does not equate higher pullet costs to better breeder performance.

“An old saying is that raising broiler breeders is more an art than a science, and EDF is changing the artwork completely,” she says. “However, [companies in] the U.S. are moving in this direction and perfecting their artwork, so in the next two to three years, many will most likely begin transitioning from skip-day to EDF in pullets.”

Looking forward, Notenbomer believes it would be better for his Canadian peers if they started to consider EDF adoption now, rather than face a scenario where they have to change to EDF rapidly because strong consumer pressure against skip-day feeding has reared its head. He thinks that when a major player like Tyson makes the shift, everyone in North America will have to shift.

“It would be better to do it at a wise pace instead of being forced to do it in a hurry,” Notenbomer says. “Don’t be scared. The benefits are there, feed cost savings, better bird health, less reliance on antibiotics. It’s a change but it’s not hard to do. The first step is accepting that it is possible.”

What the research says

Early photostimulation and spin feeding
A study out of the University of Georgia published in 2019 found that the age at sexual maturity in broiler breeder pullets can be significantly advanced with the use of a less restrictive growth curve during rearing.

Effects of non-daily feeding
A University of Guelph study published in 2020 assessed the effects of alternative feeding strategies during rearing on the behaviour of broiler breeder pullets. It found that pullets fed non-daily showed signs of hunger and frustration during off-feed days.

Twice-daily feeding
A study published in 2020 by a team of scientists at Wageningen University & Research in the Netherlands found that broiler breeders fed twice per day were calmer than those fed once daily.