After four years of ups and downs
and much time and money invested, the sun is finally shining on Ferme
Bio-Rard’s organic chicken production.

After four years of ups and downs and much time and money invested, the sun is finally shining on Ferme Bio-Rard’s organic chicken production. Since last February, 1,200 certified broilers leave the farm every week.

“During the first years, we didn’t cover our expenses,” says Mario Bérard. “It’s now starting to be worth it.”

The business Bérard founded with his daughter Annie, wife  Karine  and his son Donald to manage the organic side of their poultry farms has now found the right partner. Bio-Rard organic broilers, from Ange-Gardien, south of Montreal, are now processed and marketed by Ferme des Voltigeurs, near Drummondville.

Organic production was not always a part of Bérard’s career plan. His conventional broiler production and commercial feedmill were growing at steady pace when five years ago, his daughter Annie, now 28, suggested the family business diversify into organics. Her brother, Donald was just as enthusiastic.

Bérard had underestimated the impact of the values he and his wife had imparted to their children. Composting and recycling of domestic waste are well-established habits in the Bérard family home. Even the farm’s employees are instructed to recycle and reuse as much as they can. In the field, riparian zones near waterways and windbreaks have long been part of the landscape.

“If everyone made the same small efforts we make, it would really make a difference for the environment,” Bérard says.

His son Donald, 26, describes himself as a tree planter. “I really believe the use of herbicides and fertilizer in agriculture must be reduced,” he says. 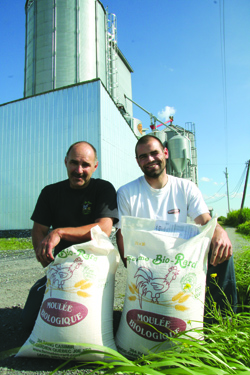 Pushed by their urge to do their share to protect the environment, the Bérard family embarked on its organic venture by first refurbishing an old feedmill that sat empty behind the newer, larger conventional feed facility. The abandoned mill was given a second life to cater to organic sheep, poultry, hog and dairy producers, large and small.

“Our first client bought only one bag of feed!” Donald remembers. Five years down the road, the feedmill is starting to be profitable. Organic crop growers are now better established, prices they are offered have risen significantly and demand for organic feed remains stronger than supply.

Shortly after launching their organic feedmill, the Bérards made their first steps in organic broiler production, using one-storey henhouses on a farm Donald had recently purchased. The learning curve was long. Good thing they weren’t in it for quick money.

“We had to learn everything. It’s very different than regular chicken production,” Mario says. Buildings were altered to give birds more natural light. Outdoor yards were set up. Animal density was reduced and antibiotics were removed from the feed.

After five years, weight gain has improved significantly, as has uniformity. Mortality rates have dropped. “There is no magic recipe,” Donald says.
According to Donald, if conventional broiler producers say they are not successful at raising flocks without antibiotics, it’s because they expect perfect results for every lot. Organic producers must have a higher tolerance for losses, he says.

“The more your animals are high-performing, the more vulnerable they are to diseases,” Mario says.

Ferme Bio-Rard broilers head for processing after 50 to 60 days. When weather permits in the summer, they are sent outside. However, Donald and Annie believe using a better feed and reducing animal density are really what make a difference.

“What pollutes the most are herbicides and pesticides used in the field,” Annie says.

Marketing is where the Bérards faced the greatest obstacles. They tried it all: on-farm sale, stands at farm show, public markets in Montreal. “It’s a lot of work”, Annie admits. “We are much better at producing.”

In early 2008, their main distributor ran into financial troubles. Flocks of organic chickens were about to be redirected to mainstream broiler processing plants. The family thought perhaps it was time to call it quits.
But a new partnership formed with Ferme des Voltigeurs has kept the organic operation going. The Drummondville family business already marketed its grain-fed chicken all over Quebec and parts of Ontario, through a network of distributors. It now offers organic chicken under its own brand name, with a mention saying, “Raised by: Ferme Bio-Rard.”

With three barns that can be used for organic production, Ferme Bio-Rard is able to produce numbers high enough to make transportation and processing costs reasonable. The Ange-Gardien farm can also increase its production to follow demand, by simply diverting some of the family’s quota (a total of 1,800 square metres) from regular to organic broiler production.
“Ferme des Voltigeurs can tell everyone they now offer organic chicken!” Donald says.

At Ferme Bio-Rard, organic agriculture will continue to grow alongside conventional farming. For the Bérards, there is no contradiction. It’s all about finding the right balance and focusing on what they do best: raising chicken.
Even their own crops are not organic, except for a tiny parcel. And with most of their barns having three storeys, converting all their poultry production to organic standards is not an option.

“Because we also do organic farming, we think a little more about the environment,” Mario says. “We may not change the world, but we are definitely not making it worse.”