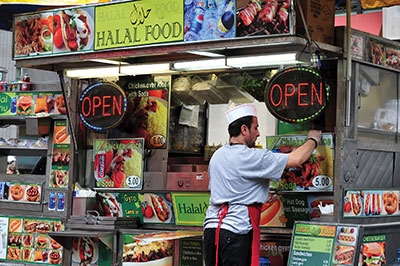 According to Agriculture and Agri-Food Canada, the market value for halal food products in Canada today is estimated to be about $1 billion.

With Canada’s Muslim community forecasted to triple by 2031 plus a growing demand by non-Muslims for halal foods, food industry observers predict this to be a bright spot in Canada’s meat market.

Statistics Canada reports that in 2011 about one million Muslim-Canadians made up 3.2 per cent of Canada’s population; making it the fastest-growing religion in Canada.

According to Agriculture and Agri-Food Canada, the market value for halal food products in Canada today is estimated to be about $1 billion. For those unaware, halal foods are foods that observant Muslims are allowed to eat or drink under Islamic dietary law. The criteria specify both what foods are allowed, and how the food must be slaughtered and prepared. Halal addresses mostly meats and meat by-products of which a significant portion is poultry. Over 30 federally inspected plants in addition to provincial plants offer halal slaughter in Canada.

Halal products are appealing to non-Muslims too.  In many countries, halal products are not seen as a religious product but as a product of higher quality with consumption becoming more commonplace amongst non-Islamic demographics. According to Canadian Grocer Magazine, “the concept of halal has extended far beyond a religious choice, also attracting consumers who are environmentally conscious [and] health conscious.” The magazine explains that, “Halal is perceived to be a more humane and ecological way of processing meat, resulting in a perception that the product is also of higher quality, safer and cleaner.”

In the U.K. for example, halal meat makes up 11 per cent of all meat sales, compared to a UK Muslim population of just 3 per cent. According to other market research reports, in Russia only 25 per cent of halal meat consumers are Muslim.

As Canadian retailers seek to cater to the growing demand, halal products are becoming more widely available. At one time, halal food products could only be found in specialty stores in large urban centres, but this is starting to change. More large retailers, such as Loblaws, Sobeys, Metro and Wal-Mart are starting to carry halal poultry products in select locations.  Much in the same way as specialty eggs and organic products were first introduced by retail chains, halal poultry products are slowly gaining space in the meat counter. Unlike specialty eggs and organic however, halal does not require any different growing practices by the conventional poultry producer.

A recent visit to a Toronto Loblaws Super Store found a selection of fresh halal chicken from whole chicken to skinless and boneless pieces as well as processed products including chicken hot dogs, chicken bacon and chicken bologna.  All were locally processed. All were priced comparably to other specialty chicken lines. All were labelled certified.

And halal goes beyond the grocery store. A website search finds more than 300 halal restaurants in Toronto and 250 in Montreal alone. These include popular fast food chains and even Asian, Portuguese, and Italian cuisine.

Sargent Farms, which is Canada’s only plant devoted 100 per cent to hand-slaughtered halal chicken, specializes in the food service trade. According to company sales manager Gary Roffel, customers are willing to pay a premium for their traditional hand slaughtered chicken.  But it’s not who you might think. Roffel referred to a recent survey the company has undertaken saying, “I was surprised to learn that it’s the younger generation that is most interested in purchasing our hand slaughtered products (vs mechanical halal slaughter) not the older, more traditional generation as one might expect.”  The company is now beginning to supply traditional supermarket chains, and while he wasn’t able to confirm a growing demand by non-Muslims, Roffel did agree that domestic demand could support a wider market.

In recognition of the growing market, Ottawa announced tighter rules for halal label claims this past April. Halal claims on food labels, packaging or advertising material must now include the name of the certifying body. “This will provide consumers with assurances that the food meets a certifying body’s standard,” the government said in a press release, “and will allow them to obtain specific information about the standards the food has met.”

The Canadian Food Inspection Agency (CFIA) won’t be establishing federal standards for what can be labelled as halal, nor will it establish requirements for becoming a halal certifying body. That will be left to the Muslim community to sort out.  But all recognize the importance of this enforceable labelling change. “Potential benefits include increased consumer confidence in halal-labelled products, fewer consumer complaints, increased demand for halal-claimed food products and increased demand for certifying services provided by halal certifying bodies,” the CFIA said.

Those within the community agree. Omar Subedar serves as the secretary general and official spokesperson of the Halal Monitoring Authority, (one of several certifying bodies). He says that the inability of meat processors to meet the rising demand for halal meat, coupled with a lack of oversight, had opened the door for exploitation.  He recently told the Toronto Star that the new labelling laws will help protect and inform consumers and help give them confidence when purchasing labelled foods.

At Eastern Halal Meat in Toronto shoppers tend to agree. Amin travels weekly to the shop because he trusts the sourcing of their products. He was unaware of the recent change to the labelling law but welcomed it, saying it may encourage him to buy his meat at a more conveniently located supermarket chain.   “I am willing to pay more, but only if I can be certain that I am getting what I am paying for,” he said.

While The Canadian Poultry and Egg Processors Association and the Chicken Farmers of Canada were not able to provide specific market data, Pam Kellogg, vice-president of marketing at Maple Leaf Foods, has previously said retail sales growth for halal is outstripping other market segments.  She cites Nielsen sales volume figures that show the halal segment of fresh chicken is growing at six per cent per year, which is greater than the total fresh chicken growth at one per cent.

In 2012 Maple Leaf Foods launched Mina, a line of certified hand-slaughtered chicken. The fresh line currently offers six varieties. Then in 2013 the company added several frozen products including chicken strips and a whole frozen turkey. Kellogg explained to Canadian Grocer Magazine that: “Only a small portion of halal shoppers [buy] halal chicken at traditional grocery and mass stores because it’s difficult to find halal offerings that are zabeeha by hand,” referring to the slaughtering process. “Offering products such as Mina is an easy way to attract and retain an influential consumer population that’s seeking a trusted halal product in a convenient way,” she said.

Halal food certification is increasingly sought for Western-influenced meat products too.  Products including sausages, luncheon meats, canned, chilled and frozen chicken, turkey and beef products and ready meals are becoming available. These offerings are in keeping with a 2005 Canadian consumer survey that found that half of the participants reported purchasing ready-made meals, and the majority wanted to see an increased availability of processed meats.

Although not nearly as many halal-certified products are launched in North America compared to the UK and elsewhere, there is still a small but blossoming market in Canada. The Halal Foodie blog regularly reports on new products. And the market has even matured enough to warrant its own annual food show attracting over 30,000 visitors a year in the past two years. The Halal Food Fest is designed to link halal suppliers with restaurants, retailers and consumers.

The export market is also seen to be an important one for Canadian food makers. Maple Lodge Farms, a federally registered facility, has been shipping its prepared halal products to the Middle East and Southern Asia for years. This is ahead of Canada’s cattle industry which is just now looking at halal export potential with more serious interest.

With consumer demand for halal meats predicted to grow substantially both within and outside Canada, together with stronger consumer interest in halal certified prepared foods, Canadian retailers and food service outlets are responding. Canada’s poultry sector has an opportunity to capitalize too.