What is being done to contain them and what farmers need to know. 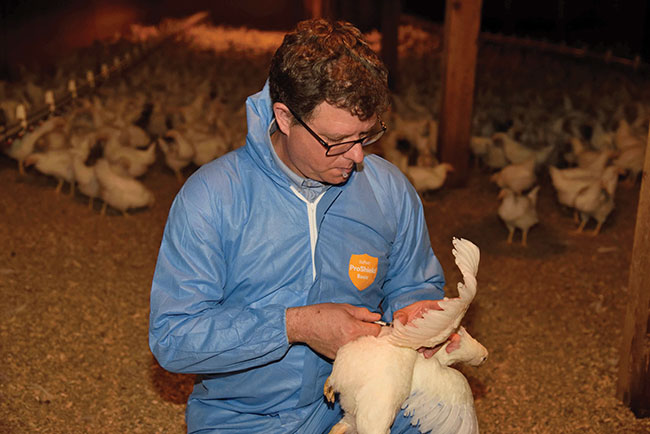 Daniel Venne, co-director of the Canadian Association of Poultry Veterinarians, says the industry needs to reflect on how to properly carry out ILT vaccinations.a PHOTO CREDIT: Claire delefortrie

While infectious laryngotracheitis (ILT) is usually a backyard flock problem, outbreaks occasionally occur on commercial poultry farms in various provinces. Currently, Ontario is dealing with a small epidemic in the western Niagara region.

ILT is an acute herpes virus respiratory tract infection of chickens and pheasants that may result in severe production losses. The virus causes infected birds to suffer from shortness of breath, coughing and crackling in the lungs, with possible blood or mucus present. There is no specific treatment for birds and this disease is not contagious to humans.

Tom Baker, incident commander at the Feather Board Command Centre (FBCC) in Ontario, explains that in early December, a vaccine strain of ILT (more on that later) was diagnosed in a broiler chicken farm in the Smithville area of Niagara, an area of intense poultry production. FBCC notified all poultry farmers as well as small flock growers that a Biosecurity Advisory Area (BAA) of 10 kilometres was being established and that heightened biosecurity was critical. All surviving birds were sent to processing.

Over the course of December, two more broiler flocks and a layer flock, all within three kilometres, were diagnosed with the disease. On January 15, a fifth flock was diagnosed, this time a pullet flock on the southeast edge of the Niagara BAA. The BAA was consequently expanded.

To control the spread of the ILT virus, producers must complete a prescribed litter heating protocol, remove and store manure on site, clean and disinfect, and implement a two-to-three-week fallow period. New chicks are being vaccinated at the hatchery.

By late January, newly vaccinated chicks had been placed at the three broiler farms diagnosed in December and mortalities had returned to normal in the layer and pullet flocks. Heightened biosecurity, completion of ILT response protocols, careful monitoring of flock health and rapid reporting throughout the expanded BAA remain paramount in controlling the further spreads of this disease.

“During 2020 as a whole, there were also 13 small flocks diagnosed with ILT, more than double Ontario’s average annual number,” Baker reports. “Similar trends were reported in small flocks in Saskatchewan, Alberta and B.C.”

Spread, detection and diagnosis
Infection usually occurs through the air, but virus entry can also occur through contact of the eyes or ingestion. Mechanical transmission can occur via contaminated equipment, clothing, boots, dead stock and litter. Sanitation procedures, which include disinfection of equipment, boots and clothing and proper disposal of litter and carcasses, are essential components of ILT control.

“It is also critical that aerosol transmission, especially during the transport of litter, be prevented,” states Daniel Venne, co-director of the Canadian Association of Poultry Veterinarians, director of poultry health at Quebec-based poultry company Couvoir Scott and recent recipient of the Canadian Veterinary Medical Association’s Industry Award.

As explained in a May 2020 article in Veterinary Quarterly, ILT in chickens can be tentatively diagnosed based on clinical signs such as conjunctivitis, gasping, laboured breathing, open mouth or extended-head respiration and expectoration of bloody mucous. “Suspected cases are subjected to lab diagnosis by conventional and molecular diagnostic tests,” state the authors, a team of scientists in India. Other respiratory diseases exhibiting similar clinical disease must be differentiated from ILT, they add. Lesions induced by ILT spread over the whole length of trachea and resemble lesions induced by the fowlpox virus, but tracheal lesions in mild or low virulent forms of ILT are similar to those caused by avian influenza, infectious bronchitis or Newcastle.

A tough disease to control
Like other herpesviruses (in humans, the cold sore virus, for example), the ILT virus can go dormant in chickens but can be reactivated whenever they undergo stress. As a result, they still shed the virus into the environment and potentially spread it. This makes eradication of the disease difficult.

And while vaccination for ILT has been in place almost for 100 years, the practice itself carries the potential to cause ILT. Thus, it’s paramount that it be carried out correctly. Experts, therefore, strongly recommend veterinary supervision when producers decide to vaccinate, according to the ILT factsheet from the Ontario Ministry of Agriculture, Food and Rural Affairs.

The factsheet authors add that, “Since both natural infection and vaccination have been shown to produce carrier birds, it’s extremely important that susceptible chicken flocks are not exposed to vaccinated or previously infected chickens. Mixing of birds should only be done when a complete history of the birds is available, and when it’s absolutely certain a potential ILT carrier is not present.”

Effective vaccination
ILT was first detected in 1925 in the U.S. and vaccination has been intensively used since then to prevent the disease. However, it must be carried out correctly, and Venne explains that “there’s a lot of reflection” that needs to be done about how.

ILT vaccination can work, but as he explains, it’s very complex. In Quebec, for example, if broiler chicks are vaccinated (not a standard procedure, as the vaccine is expensive), a recombinant vaccine is given at a day old. Recombinant vaccines involve the use of DNA that encodes a viral or bacterial antigen.

However, in areas where there is some ILT infection, a live vaccine can be given to broilers, pullets or layers that have arrived unvaccinated from the hatchery at or after 17 days of age. Between two and 17 days of age, chicks have maternal antibodies in their systems that can render the vaccine ineffective. Live attenuated vaccines contain a small amount of the weakened live virus or bacteria. In the case of ILT, they can be of chicken embryo origin or tissue culture origin, called CEO or TCO for short.

However, Venne explains that vaccination at 17 days doesn’t work with the current required withdrawal period of 21 days. “These days, we slaughter broilers as young as 31 days, and the withdrawal period, therefore, needs to be reduced by eight days for that scenario,” he notes. “This has occurred in other countries and this is a big issue in Canada. If we’re going antibiotic-free in broiler production, vaccination is one of the most important tools we have, and so the withdrawal time needs to be shortened.”

Venne wants farmers to watch for ILT if their birds are stressed, but reminds them that symptoms won’t show up right away. He adds that older birds kept in backyard flocks for many years can be carriers without symptoms. But if stressed, these birds can shed the virus and infect younger birds. Thus, he implores backyard flock owners to be educated and watchful.