Past outbreaks make many fear reovirus. But there’s more than one cause of lameness. 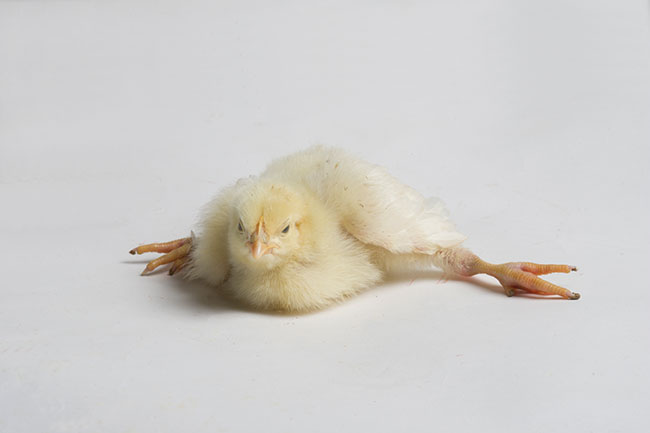 Past issues with reovirus have some producers fearing the worst whenever they see lameness in their flock. But there are often other factors causing the problem. PHOTO CREDIT: Poultry Industry Council

Avian influenza is top of mind for Canadian poultry producers these days. Several years ago, though, it was reovirus that was causing problems for Canadian flocks. It’s a viral arthritis that causes inflammation of the leg joints. There’s no treatment and, although mortality from the actual disease is low, affected birds often have to be culled for various welfare issues.

In 2018, approximately 500,000 birds were affected in an outbreak in Ontario. B.C. poultry veterinarian Dr. Gigi Lin also recalls reovirus being a significant issue in western Canada during her first couple of years of practice starting in 2017.

“During that period, variant reovirus was very prevalent in Canada, especially in western Canada; it’s a virus that can cause severe tendon infection in broilers and cause severe lameness,” Lin says. “Reovirus has gone down significantly; in my practice, it has dropped over 95 per cent in the last several years and it is very uncommon as of today in B.C. in particular.”

The outbreaks have left lasting impacts on producers, though, she adds; so much so that it’s become common that when poultry farmers see lameness, their first thought often turns immediately to reovirus even when there are actually other factors causing the problem.

According to Dr. Tony Redford, an avian pathologist with the B.C. Ministry of Agriculture based in Abbotsford, lameness is a top five health issue in Canada for poultry in general, and one he says is in the top three for broiler production.

Signs of trouble
Poor uniformity is an early indicator that something is amiss with a flock. Lameness could be the issue if birds aren’t moving around properly and an abnormal number of them are laying down or if feed or water consumption is down because birds can’t get to the feeder or waterer as easily.

“You don’t see birds dying if lameness is the primary issue. They would be more likely to starve, which takes time, so if you’re not getting a lot of dead birds, lameness should be high on the list (as a possible problem),” Redford says.

In live birds, lameness is relatively easy to identify, Lin adds, as lame birds won’t move away when they’re approached. In more severe cases, lame birds may use their wings as an additional support to help them get around. So, she recommends growers check any dead birds for bruising on the wing tip. Another spot to look at is skin and muscle on the breast; there will be more abrasions or bruising in this area if the bird had trouble walking.

Birds with a condition called kinky back can be seen rocking back and forth with extended limbs. 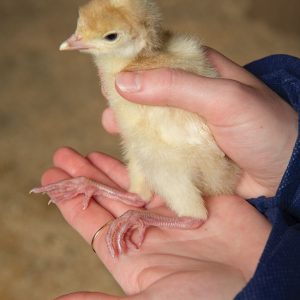 Experts say lameness is a top five health issue in Canada for poultry in general, and one he says is in the top three for broiler production. PHOTO CREDIT: poultry industry council 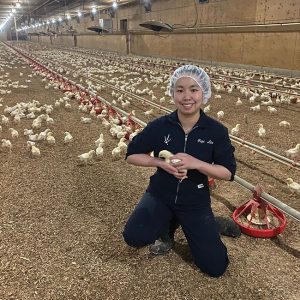 Rooting out the problem
Both veterinarians note that lameness in poultry has both infectious and non-infectious causes, but currently, mobility problems in birds mostly occur as a result of infections. This includes bacterial bone infection, joint infection, bacterial septic arthritis or a systemic bacterial infection coming from the blood stream, like enterococcus or staphylococcus.

Occasionally, Lin says, there will also be cases of a condition called kinky back. It’s a disorder where a vertebral deformity will cause spinal compression that gives birds hind limb paralysis. This will happen most commonly at the age of two and a half to three weeks and manifests in broilers as the birds gain weight.

Infectious causes will take some time to move through a whole flock, Redford adds, and not all birds will be affected. A bacterial problem like septicemia or systemic bacterial infection early in a bird’s life may not kill the bird but will stay in the joints or bones where it can cause longer-term issues.

Non-infectious causes of lameness happen due to a range of problems – both individual and multi-factorial. One that can be seen within the first week of a chick’s life is rickets, caused by nutritional deficiencies. Modern commercial poultry rations are very nutritionally balanced. So, while not commonly seen, it can happen because of mixing errors, for example.

Genetics can also play a role, sometimes causing bone malformations, but this too is uncommon. Management issues like soiled litter can cause physical damage on the foot pads of the birds. In addition, humidity can cause foot problems.

“Humidity and how wet it is in the barn can cause foot problems, although we don’t see that too often in broilers, more in older birds,” Redford says. “But it can cause higher bacterial growth in the litter and cause septicemia. And a full barn clean-out can affect bacterial and viral carry-over.”

Treatment and prevention
Because there are a variety of possible causes of lameness, getting an accurate diagnosis is very important. Broilers, in particular, have a relatively short life cycle. So, any interruption in their feed intake or development will have an impact on their growth, and if it lasts even two to three days, they are unlikely to catch up, Lin says.

If young birds are showing severe lameness and unable to get to feed and water, they may be culled due to welfare concerns. If lameness is detected in broilers further on in the growth cycle, it is possible to get the birds to processing age, but they’re likely to have poor uniformity and/or be underweight so producers will be penalized.

“We do treatment and euthanasia of the current (affected) flock, but if it is recurring and there are no associations with external factors or the breeder flock, then we look into management,” Lin says. “There are so many underlying causes of bacterial infection and there can be multiple factors. So, you must get to the bottom of recurring problems.”

Staphylococcus, enterococcus and E.coli are common bacteria that can reach joints. Thus, where they come from is important, she adds.

The biggest portal is the gut. That’s why it’s important to avoid situations that can damage or impact gut health. That includes overheating at early stages in the brooding period, feed interruption or if birds get chilled.

Bacteria can also enter a bird’s system through the respiratory tract. Hence, Lin says to look at barn ventilation, temperature, draftiness, humidity and litter condition. In breeder birds, physical damage on the skin or hock is also a portal of entry.

Any concurrent immunosuppressive diseases, like bursal disease or bronchitis disease, for example, can also be a factor.

“The bottom line is look at it from a holistic point of view: how do you better equip the birds to be healthier?” Lin says. “Get a field service technician or a veterinary professional help. Sometimes it can take some time to sort it out.”

The varied causes of broiler lameness