Experts gather to hatch a plan for the disease. 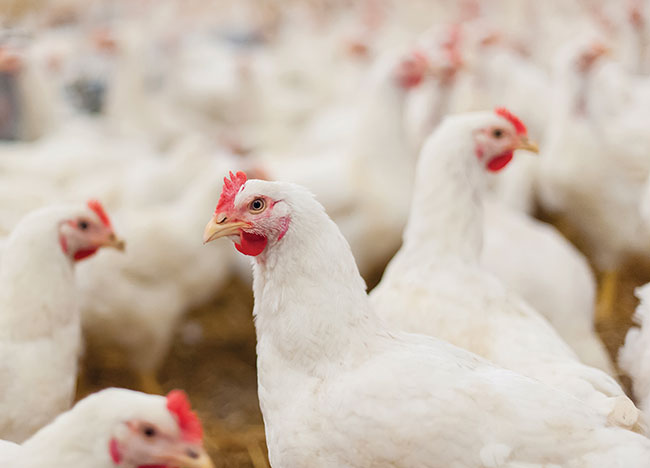 Following good biosecurity protocols at all times is the best way to reduce the risk of false layer syndrome (FLS) to poultry flocks. If the disease is transmitted, early detection is key to reducing its economic impact.

Those were two of the takeaways from a recent meeting hosted by Livestock Research Innovation Corporation (LRIC) at the request of Egg Farmers of Ontario (EFO) about FLS, a disease caused by the Delmarva strain of infectious bronchitis virus (IBV).

A rise in U.S. cases last year has caused concern about increased occurrences in Canada, prompting EFO to bring representatives from across the egg supply chain together for an update on the issue.

“False layer syndrome is a disease of economic concern to the egg sector, so together with EFO, we wanted to be proactive and bring everyone together to look at the most current research, what’s being done and what producers can do in the short term to protect their flocks,” says LRIC CEO Mike McMorris.

IBV is highly contagious with a short incubation period. It can spread throughout a barn in one to two days through aerosol transmission (sneezing), and contaminated organic matter, drinking water and equipment.

White egg laying strains are more affected than brown and the younger the birds when infected with the Delmarva strain, the more severe the FLS will be.

Prof. Brian Jordan, University of Georgia College of Veterinary Medicine, has two FLS projects currently underway. One is looking to prove that FLS is determined less by the strain of IBV than the age and immune status of the bird at time of infection.

The second is a sentinel bird field study to determine whether other factors cause FLS and how well current IBV vaccines work.

Canadian isolates have been provided by Dr. Davor Ojkic from the Animal Health Laboratory. The Ontario sector has been using a day-of-hatch vaccine longer than anyone in the U.S., so this will help determine how vaccination is controlling or affecting virus circulation.

The University of Calgary’s Dr. Faizal Careem is assessing the impact of Canadian IBV variants on egg production and fertility. Ojkic is a co-investigator on the five-year project, which is funded by the Canadian Poultry Research Council, Egg Farmers of Canada and Poultry Health Services in Alberta.

“Coordinating Ontario efforts with those of Dr. Jordan and Dr. Careem is important,” McMorris says.

“LRIC is maintaining contact with both researchers and will provide updates to the Ontario industry in collaboration with EFO.” 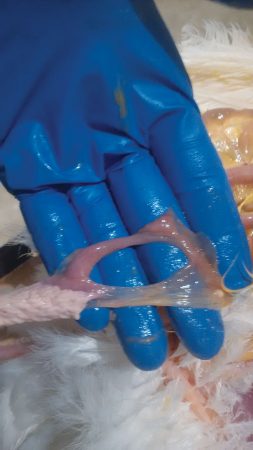 This picture shows a lack of oviduct development as a result of false layer syndrome.

Combating FLS
An effective vaccine is the ultimate solution, but it’s challenging as new strains are always emerging. As well, vaccination timing is critical as birds vaccinated too early don’t develop strong immunity.

Good biosecurity is effective at reducing transmission risk, especially when barns are close to other poultry flocks, and early detection of pullets with FLS or IBV diseases is vital to reducing economic impact.

“Every segment of the industry, from hatcheries and producers to feed suppliers, veterinarians, catchers, transporters and processors, needs to do a better job of following strict biosecurity protocols,” says EFO chair Scott Graham.

“We can’t emphasize enough the importance of education and awareness regarding biosecurity.”

An FLS insurance program is in the works. According to David Bethune of the Poultry Insurance Exchange, an expert veterinarian and insurance consultants are currently determining disease frequency and the potential magnitude of claims in order to ultimately establish a cost for coverage. The goal is to have a policy in place for the end of the year.

This article is provided by Livestock Research Innovation Corporation as part of LRIC’s ongoing efforts to drive innovation in livestock production and report on Canadian livestock research developments and outcomes.