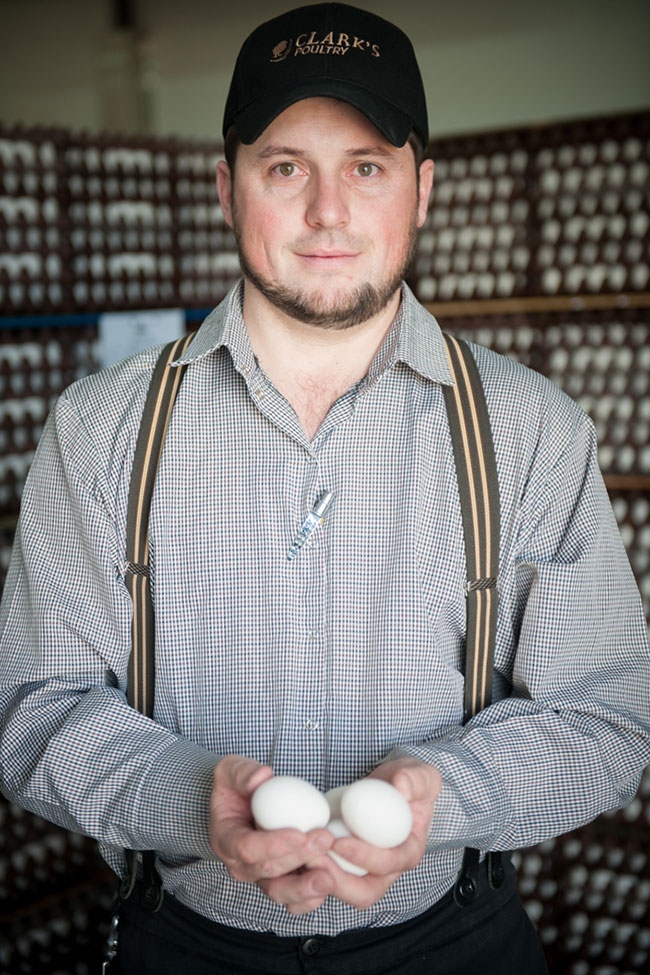 Born and raised on Sunrise Colony, Michael Hofer grew up in the crop fields outside of Etzikom, a small hamlet in the southeast corner of Alberta. Many of his early days were spent picking rocks, seeding, spraying, harvesting and learning the ins and outs of farming alongside his father. And while the colony’s farming operations provided no shortage of work for a young boy, they also provided many opportunities.

In 2012, at the age of 28, Hofer began managing the colony’s layer operation. Something he took on whole-heartedly. “It is a seven day a week, 365-day commitment. It is not just a job, it is a way of life,” Hofer says. Hofer manages both the farm’s layer and pullet barns, which currently house Lohmann White layers in a free-run aviary system, producing free-run white omega-3 eggs.

A housing transition
Two years into taking on the management of the layer operation, Hofer was faced with the challenging opportunity of learning a new housing system. An obstacle he says is one of the biggest challenges for the industry right now.

“We have one pullet barn and two layer barns – an old conventional barn that was built in 1978 and was retooled once since, and then we built a brand new Vencomatic free-run layer and pullet barn in 2014,” he explains. “For our operation, the new housing system was no easy decision. A lot of planning was done, starting with asking our grader about the demand for free-run eggs. We looked at quite a few barns and decided to go with Vencomatic. And I think we made the right decision for our farm.”

For other producers dealing with the transition away from conventional housing, he says, “go at it with an open mind, knowing that it will cost more, be more work and have different challenges than a conventional barn. Do your research and things will work out.”

In terms of management, the producer says operating in a free-run system certainly takes a different mindset than conventional.

Hofer says an early challenge in the first few flocks in his aviary barn was achieving proper egg size, early. “With the birds having the ability to move around more we needed to feed higher energy diets. Switching to soy oil from canola oil to increase linoleic acid levels in the diet helped overcome this challenge.”

Since Hofer began his role, the Sunrise Colony layer operation has seen an increase in flock size, from 8,600 to 28,644 birds, and Hofer doesn’t plan on slowing down anytime soon with his sights set on further growth and even a research project on the horizon.

“With our next pullet flock that we will be placing in July, our farm will be one of the farms working with Tina Widowski, who is the Egg Farmers Chair in poultry welfare, and her team on a project on the behaviour and physical development of pullets reared in different styles of rearing aviaries,” Hofer adds.

Agvocate
Despite what you may think, Hofer’s dedication to on-farm improvements are not what made him standout in his community – he was most recognized for his work as an industry advocate.

“Michael has been a member of Egg Farmers of Alberta’s (EFA) Egg Ambassador program since 2016,” says David Webb, marketing and communications director with EFA. “He has volunteered at events such as the Calgary Stampede and Aggie Days Lethbridge, where he helped care for 30 live birds, while engaging students and the public to answer their questions about eggs and egg farming. He also made in-store appearances at Save-on Foods locations in Lethbridge last summer, answering consumer questions about eggs, while promoting the fact that he was one of more than 170 egg farming families across Alberta that are proud to provide fresh, local, nutritious eggs for their fellow Albertans.”

Hofer enjoys interacting with consumers and strongly believes that farmers play a big role in the future of the industry. “More than ever consumers want to know where their food comes from, how it was produced and by whom. I believe participating in these events is one of the many ways we as farmers can be transparent,” he says.

In 2016, Hofer also opened his farm gates to the EFA camera and film crews to be showcased in a producer profile. “He proudly showed off his barn, talked about what it meant to him to be an egg farmer, and, overall, did a fantastic job representing the egg industry,” Webb says. “Passionate and knowledgeable advocates are extremely important for the egg industry, to engage consumers and share our stories about eggs and egg farming, to help foster public trust. Our advocates also help recruit fellow farmers to expand our pool of advocates, and often develop into the next generation of industry leaders, contributing to the sustainability of EFA and the provincial egg industry.”

Hofer recently began taking steps to become a member of the EFA’s Production Management Committee. “It will be a great opportunity to gain some more experience and hopefully have some valuable input on the issues facing producers,” he says.

“EFA’s Production Management Committee is responsible for reviewing policies and programs that impact farmers, ensuring they are workable at the farm level.  Having engaged, knowledgeable farmers like Michael Hofer on the PMC helps EFA build programs that farmers embrace and are able to implement successfully,” says Christina Robinson, EFA’s farm services manager. “Dedicated committee members also provide EFA with an effective means to continually review and adjust programs so they align with industry standards and best practices, which reflect the values and expectations of consumers.”

Family values
Along with growing a career on Sunrise Colony, Hofer has also built a family. He and his wife, Ida have five kids – Kaitlyn (13), Peter (11), Elizabeth (9), Tabitha (6) and Jacob (3). And, when it comes to his kids, Hofer says he truly enjoys involving them in the farm, just as his father did, as it provides them with many life lessons and an appreciation for what farmers do and where their food comes from.