A try-anything attitude propelled this young producer through the process of rejuvenating his family broiler farm. 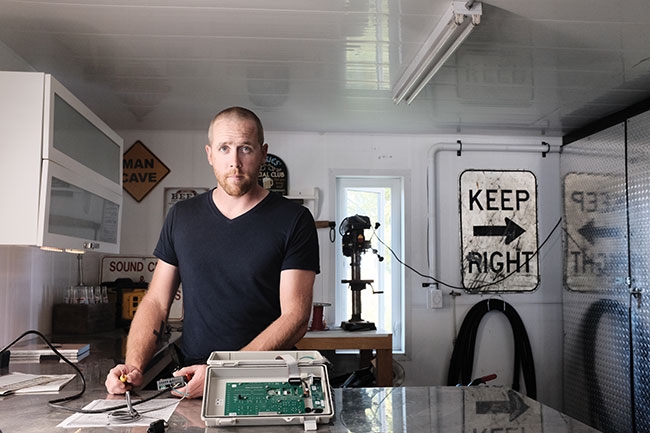 After building a career in the electrical trade, Steve DeVries suddenly found himself returning to the family broiler farm. After the sudden passing of his father, the long-planned transfer of the family farm was quickly accelerated. “His passing pushed everything forward about 20 years,” he recalls.

While still operating the farm, his father had insisted on getting his new daughter-in-law Kahley, whom Steve married in 2005, acquainted with farm life and the business. “I always found it really strange because my Dad would get my wife to take minutes of our farm meetings. But those minutes became invaluable after he was gone. We used them to solve disagreements and make decisions,” DeVries remembers.

As he reminisces about his childhood on the farm, it is clear there have been many changes and farm innovations over the years. “I remember he would adjust inlet vents with a hand crank,” he says. “I don’t know how he did it. Now I run both of my barns entirely from my phone.”

Today, the DeVries live on the farm in Listowel, Ont., raising their three children. They operate in a conventional system, producing 30,000 40-day birds annually, raised in two barns in eight-week cycles with 12 days between flocks.

DeVries notes that further restriction on antibiotic use is coming and so there is a greater need for bird management these days. “Animal husbandry is huge,” he says. “As farmers we are going to have to get better at looking after these animals, caring for them and paying more attention in order to catch a lot of the issues where antibiotics have helped in the past.”

Industry involvement
DeVries is also a firm supporter of supply management, something that has motivated him to step up and become a farmer-elected district representative with Chicken Farmers of Ontario (CFO), which holds the primary function of acting in a consultative capacity to the board and helping to engage other local farmers.

“What challenged me to become a district representative was when I attended a regional event. I came to the realization that we need farmers to voice their opinions. Supply management has given me the opportunity to farm, and so I want to be a part of making sure that we do everything we can to ensure it stays viable for the next generation, and that includes getting involved at the local level.”

DeVries is one of four district representatives in CFO’s eighth district. He has been in the position for three years.

“Steve was eager to know more about the industry, how he could get involved and how he could broaden his leadership skills,” says Mark Hermann, board director of District 8 and second vice-chair of CFO. He adds that in many cases the district representative role is an initial step towards further leadership in the organization.

Trade experience
Prior to taking on the farm, in 2004 DeVries invested himself in the electrical trade. He began his career working primarily in feed mills before moving on to work on poultry farms. For four years DeVries worked with a poultry barn equipment and automations company, installing barn controls for water, heat, ventilation and preparing the barn for a new crop of chickens.

“Getting into the chicken industry, there is a huge learning curve. It was my job to help other producers walk through the process of making sure the barn was properly set up,” DeVries says. “You get to see a little bit of everything. You see guys that are really innovative and are willing to try different approaches to growing a bird. I learnt so much on the job that I could apply on my own farm, like being able to improve chick performance in the first seven days, things like that.”

In 2017, DeVries launched his own electrical business – Gotham Electric – which he operates congruently with his poultry farm. “That was probably the best decision I have ever made,” he says. “Being on my own has given me the freedom to be able to go where I am needed.”

Hermann adds that DeVries’ background in the electrical industry gives him a unique perspective during industry conversations. “He always has ideas and input. He also has a really good technical background, so it is always really interesting to talk to him about technology in the barns and how that is progressing.”

DeVries has recently turned his entrepreneurial energy towards another new project, an agriculture technology company launched by his brother-in-law called BinSentry.

It has developed a sustainable (solar and battery-powered) Internet of Things sensor that installs in the top of feed bins and connects with feed mills to give them live volume/tonnage information for feed tracking, consumption data and supply management optimization. The sensor eliminates the need for anyone to climb feed bins and reduces the chances of animals going without feed.

With DeVries’ desire to be involved in the industry and his innovative mind, the rising star is bound to find continued success on his farm and elsewhere.