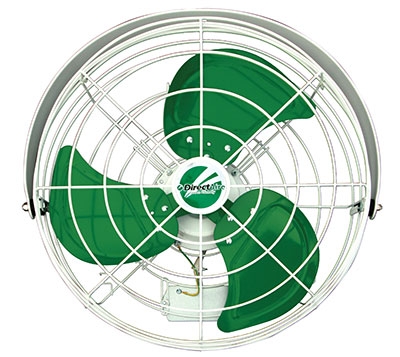 No matter how tightly sealed barns are, or how well-managed they are, stir fans will always pay back with better floor conditions, lower heating costs and improved performance.

High heating costs, wet floors, elevated carbon dioxide levels, uneven bird distribution: these are all problems that can be influenced by the use of stir fans.

Heat Stratification
A situation that many producers may be dealing with is outdated heating systems. Older-style brooder heaters and box furnace heaters (which may be the best option for breeder barns) have some inherent problems. The biggest issue is the percentage of heat that rises to the ceiling instead of the floor, where the heat is needed. In brooder-style heaters, this can be nearly 50 per cent, and in the case of furnaces, almost all of the heat rises instead of heating the floor, resulting in a temperature difference of up to 15 F. In open-truss barns, the stratification of air was as much as 20 F.1

This would be fine if gas were a penny a litre, but obviously that’s not the case, so we need to mix that hot air at the ceiling with the cooler air at the floor. During brooding or extreme cold, even with a proper minimum ventilation system, there won’t be enough mixing to even this out, so stir fans are the best way to mix the air. Within five minutes of turning on stir fans, a temperature difference between ceiling and floor of under 3 F is easily attainable.

Litter Moisture
Creating more air movement over the litter – especially the newly heated fresh air – will create more opportunity for moisture evaporation and result in less caking. The fresh air that has been heated to 40 F, for example, as it enters the barn and travels along the ceiling, will double its water holding capacity twice. What that means is, even with 80 per cent outside humidity levels, that fresh air would have a relative humidity level of 20 per cent after heating, and the ability to pull a lot of moisture out of the litter if it reaches the floor. An additional side-effect of reducing the litter moisture and caking will be lower ammonia concentrations.

Carbon Dioxide
Another benefit is decreasing the level of carbon dioxide at the bird level. This can be a problem particularly during the first week of brooding when moisture control hasn’t yet become a problem.

Because heaters produce a unit of carbon dioxide for every unit of natural gas and three for every unit of propane, and the birds are also producing the gas, buildup can occur quickly near the floor. Carbon dioxide is heavier than air, and can easily be 10 to 20 times the normal outdoor level (400 parts per million) with under-ventilation in a poultry barn. A level of 5,000 ppm can begin to affect performance, but it is recommended that levels be kept below 2,500 ppm. With stir fans running, levels at the floor can decrease as much as 50 per cent as carbon dioxide is dispersed throughout the barn.

System Design
The purpose of stir fans are to mix the air, not to circulate the air at a high speed, so the sizing and speed of the fan should reflect this goal. In general, for most applications, an 18- to 20-inch fan will do a great job of stirring the air without chilling young birds, especially if fans are angled slightly toward the ceiling. A second factor to keep in mind when purchasing fans is the grill. The fewer ribs in the grill, the cleaner the fan will stay, and the better the airflow will be.

Calculation of 40 x 500 x 10 x 15 per cent gives us 30,000 cfm capacity for our stir fan system, so if using 3,000 cfm fans, 10 will be needed. If you need 36-inch fans for wind chill in the summer in curtain side barns, they should be variable speed so they can be used as stir fans in the cold months, or it may be worthwhile to have a second system with smaller fans.

There are a few schools of thought on stir fan layout, the most common are the “racetrack” and “straight-line” configurations. It works well to run a straight line down the centre in 40-foot-wide barns, spaced about 50 feet apart. But in wider barns, a racetrack configuration makes more sense because it is difficult to stir the air wall to wall more than 40 feet.

No matter how tightly sealed barns are, or how well managed they are, stir fans will always pay back with better floor conditions, lower heating costs and improved performance.  They are a relatively small investment, and if you already have them, they should be in working condition and in use.