Phasing Out Conventional: 6 tips for a smoother transition 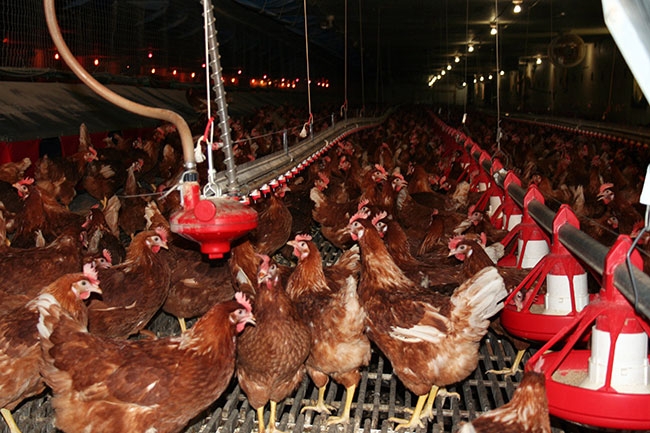 On page 3, we profiled three Canadian egg producers who made the transition from conventional to new housing systems. Glen Jennings of Nova Scotia transitioned to an enriched cage system, Charles-Éric Bouchard converted to a free-run system and Scott Janzen of British Columbia chose a free-range system. Here are their tips on how to make the move  away from conventional housing smoother.

1. Research, research, research
All three producers cannot emphasize enough the importance of doing research beforehand. Gather information, ask questions and prepare yourself by having the right tools for the job.

In preparation for the transition from conventional to free-run, Bouchard and his father visited others who had already changed over. “You have to understand how the system works and you should talk with people who have them so you understand the demands,” he says. “It is a challenge to change your way of doing things. We learn from mistakes and so, if we can learn from others instead of making those mistakes ourselves, we’re better off.”

Jennings agrees. “If somebody builds a new barn and puts in a brand new system and you talk to them a year or two later, they won’t mind telling you about their experiences,” he says.

As a member of the Egg Farmers of Canada board, Jennings was able to talk to producers all across the country. During barn set-up, he was struggling with getting the lighting just right, and so he looked to his network for helpful advice.

“I had all kinds of information from good producers across the country,” he says. “I plugged it into my own system to see what was going to work with us. I was probably fairly lucky at that because I haven’t tweaked a thing since. It’s worked perfectly from the day the birds went in.”

The truth is, though, it’s not luck. Jennings spent an incredible amount of time gathering information before making the transition. “Do your homework – do your research,” he adds. “Don’t be afraid to pick up the phone and call a fellow producer.”

2. Follow consumer demand
In preparing to make the transition, all three producers mentioned the importance of knowing the market. “It was kind of a big decision,” Bouchard says. “We never had aviaries – only conventional cages. But we knew that the market was expanding into free-run.

“The consumers decide what they want to buy, and at that time there was increasing demand for free-run eggs,” he adds. “For us, it was more natural to go where the consumers are actually going.”

Scott Janzen had the same experience in B.C. In 2014, he noticed that the marketplace was rapidly shifting towards free-range. “We were following the market, and there was a need for it,” he says. “I jumped at the opportunity to get into that type of production.”

3. Choose a system that works for you
Perhaps most importantly, though, is to choose a system that works for you. Janzen chose an aviary system for two main reasons. Property in the lower mainland of B.C. comes at a premium, he says. It is not only expensive, but also hard to find adequate pieces of property. “With an aviary system, we can build a smaller barn,” he explains. “But because we can count different levels, we can still put in more birds.”

When Bouchard was doing his research, he, too, knew it was important to choose a system that he’d be happy to work with. He and his father went to an industry expo event in Atlanta to meet with different companies that provide new housing systems. They made the decision while there. “We chose a system that we felt was more natural for us, and what we wanted to work with,” he says. “I think that has been very helpful for us.”

4. Prepare for the challenges
With new housing systems comes additional risk, something that Janzen understood well before transitioning into free-range production. He says that his network was great for helping him to understand and mitigate the extra risk that comes with switching to free-range. While eagles and hawks have been a problem, he’s been able to deal with predators like coyotes and foxes by building a tall fence system that’s dug into the ground.

Feather pecking can also be an issue in free-range systems. But Janzen says it can be minimized by providing the birds with distractions. Aviary systems, he says, “are like jungle gyms for chickens. I say that because they have a lot of stuff to do. They’re jumping, they’re flying, they’re perching, they’re moving around,” he says. “In the free range system, you have to give them stuff to do. If not, they get bored.”

Jennings faced a different type of challenge. When moving to an enriched system he decided to renovate an existing barn rather than build a whole new one. “What that did was put us out of egg production for four months in that one barn,” he says. “I tried my best to estimate the cost of that, but when you lose that cash flow for four months, it hit us a little harder than we expected and it took some time to recover from that.”

5. Be patient
In alternative housing systems, management is totally different than in conventional. “You have to be patient,” Bouchard says. “You have to be observant. The birds decide what they want to do, so you have to be able to manipulate them in the barn without touching them.”

Training starts when they are pullets, Bouchard adds. For a 20,000-bird barn, Bouchard says he spends one hour each night for two to three weeks.

Janzen agrees. “One of the biggest challenges of moving to an aviary system is getting the birds to do what you want them to do. Once the pullets move into my layer barn, I still train them. Every night when the lights go off, if there’s a bird on the floor, I actually pick it up and set it on the system on a perch line. I do that for probably three weeks straight.”

In their early weeks, this can amount to anywhere between 100 and 1,000 birds on the floor. Each night, they’re picked up and put on the perches. “We do that for training purposes because we want them to be on the system at night so they don’t lay their egg on the floor,” Janzen explains.

“If an egg is on the floor, more than likely they’re going to step on it and break it,” he continues. “We want to make sure that as many of those eggs get into that nest as possible to give the best quality product. After three weeks, if they haven’t figured it out, they’re probably not going to. After six to 10 weeks, there’s not a whole lot you can do with regards to training.”

6. Build your own network and help others
All three producers admit that they wouldn’t be where they are today without the help of other farmers. For this reason, each has an open-door policy where others who are considering making the transition can come and see how their particular system works.

In B.C., Janzen says aviary producers have gotten together in the past few years to form a support group of sorts. They meet and hold roundtable discussions on challenges that impact their farms. “We’ve been able to lean on each other,” he says. “It’s just a matter of networking within your peers and trying to come up with the best possible solution, knowing full well that some of the systems are going to work great, and some of them won’t. It’s kind of like learning farming all over again,” he concludes.