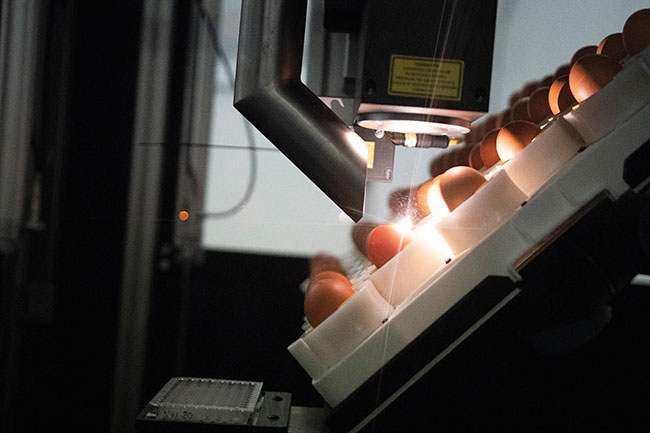 Seleggt uses a laser that makes a tiny pinhole in the egg to extract fluid for gender testing.

The world’s first ‘no-kill eggs’ are on the supermarket shelves in Germany. Respeggt eggs first hit the shelves in Berlin in November and have since been rolled out in other parts of Germany. They’re the result of the success of Seleggt Acus, patented technology that determines a chick’s sex before it hatches. The innovation is being hailed a breakthrough in animal welfare technology.

Each year, over 45 million day-old chicks are slaughtered in Germany. Globally, that number is estimated to be somewhere between four to six billion. Male chick culling has been a difficult-to-tackle issue, and one that has recently surfaced on the radar of animal welfare activists in Europe.

Chick culling entered the spotlight there when a video showing an Israeli animal rights group trying to shut down the machine used to shred day-old male chicks was released. In the video, an activist is seen challenging a police officer to turn the machine back on. The video went viral, prompting the development of a more humane solution.

One of those solutions, Seleggt, was developed in Germany. It’s a non-invasive technology that is able to determine a chick’s sex before it hatches. Male eggs, therefore, can be sold to supermarkets or used as feed rather than macerated.

The big news is that the technology is now non-invasive, says Carmen Uphoff, assistant of the general manager at Seleggt, in an interview at EuroTier in Hanover, Germany. In the earlier stages of its development, Seleggt extracted liquid from hatching eggs for hormonal analysis using a needle. While the needle worked well, it was incredibly slow, Uphoff noted. Following each pinprick, the needle needed to be cleaned. This was done to avoid hygiene issues and cross contamination during the process.

An independent expert committee appointed by the DLG (the German Agricultural Society) determines the winners. Seleggt won a silver medal at EuroTier 2018.

It uses a laser that makes a tiny 0.3 mm-wide pinhole, a process that is both non-invasive and completely hygienic. Air pressure pushes the liquid, called allantois fluid, out of the tiny hole.

Seleggt uses a laser that makes a tiny pinhole in the egg to extract fluid for gender testing.

The process – called endocrinological analysis – works much the same as a human pregnancy test where a chemical marker detects a hormone present in female eggs. The results are displayed through a colour change, which indicates the presence of a male or female embryo. Female hatching eggs are returned to the incubator, while male eggs are stamped and moved to a refrigerator, which stops the development of the egg. The procedure takes place on day nine of 21.

The process takes just one second per egg for a total of 3,500 to 3,600 eggs per hour. One machine can identify 60,000 to 70,000 eggs per day, assuming it’s operating for 18 hours a day. Samples are automatically collected, so human hands need not touch the eggs.

While male eggs in Germany are currently being sold in superstores, there are other uses for them as well, explained Uphoff. Male eggs could also be used in pig feed to address health issues, he says.

“We have a huge problem with diarrhea with piglets,” he says. “Today, you have normal egg powder in the recipes for the feed of piglets. The problem is that egg powder is a normal food for humans as well, so it’s expensive. It’s also a waste of a good product since you put it back into the food production chain,” he adds.

Similar technology developed in Canada
In Canada, researchers from McGill University, with support from the Egg Farmers of Canada, are developing similar technology, called Hypereye.

Hypereye is a non-invasive egg sex identification tool that uses hyperspectral imaging to identify infertility and gender of day-old chicks, instead of testing fluid inside of the egg for the presence of hormones.

In July of last year, the Lawrence MacAulay, minister of agriculture and agri-food, visited the farm of Egg Farmers of Canada chairman Roger Pelissero, where he announced an investment of $844,000 in support of Hypereye research.