Process involves extracting and analysing fluid from each egg. 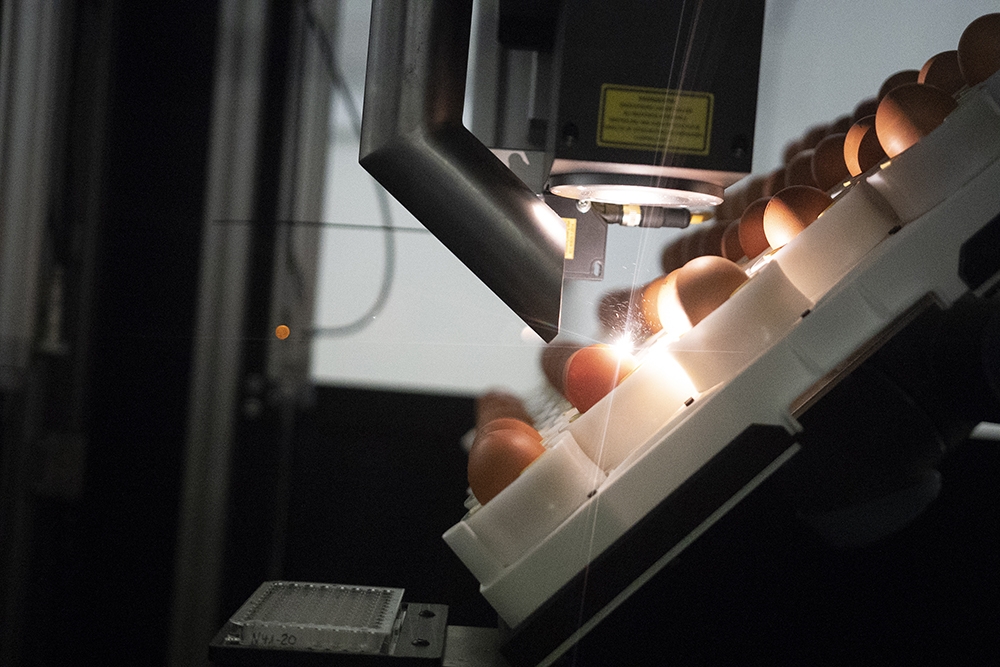 The SELEGGT device uses a laser to burn a tiny hole into the hatching egg shell to extract fluid for analysis. SELEGGT

SELEGGT, a joint venture between HatchTech, German supermarket chain REWE and the University of Leipzig, has developed a market-ready method for gender identification in hatching eggs.

In Germany, supermarkets are already selling eggs from ‘hens without brothers’.

The eggs from which the laying hens are born have been checked on the genus during the incubation process.

In the SELEGGT method, a laser burns a hole of no more than 0.3 millimetres into the hatching egg shell.

Afterwards, a small amount of fluid is extracted through a non-invasive procedure. Hence the interior of the hatching egg is untouched and remains safe and sound.

Through a change in colour, a marker will indicate whether the sex-specific hormone estrone sulphate can be detected in the hatching egg.

If detected, a female chick is developing in the hatching egg. Consequently, only female chicks hatch on the 21st day of the incubation.

No estrone sulphate indicates a male hatching egg, which is separated and processed into high-quality animal feed.

The developers expect the method will prevent millions of male day-old chicks from being gassed.

In Germany alone, around 45 million male chicks from laying hen breeds are killed every year.

German Federal Minister of Food and Agriculture Julia Klöckner welcomed the news. “This is a great day for animal welfare in Germany!”

Jan Kunath, the Deputy Chief Executive Officer of REWE Group, adds, “Throughout next year, our customers will be able to buy the so called free-range respeggt-eggs gradually throughout Germany.”

At the same time, SELEGGT is developing a business model to make the technology available to the industry as a cost-neutral service.

The patented process will be available to the first hatcheries from 2020.

Canadian researchers at McGill University, with support from Egg Farmers of Ontario, have been developing their own gender identification technology for several years.

Called Hypereye, the patented scanning device is still being fine-tuned and recently received $844,000 in funding from the federal government to help get it to market.