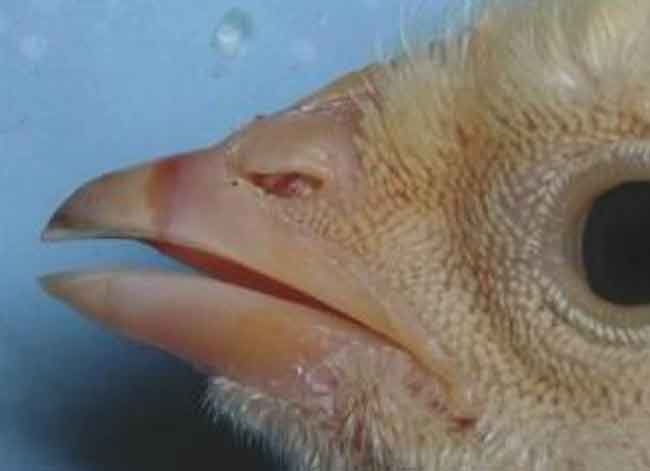 Infrared beak treatment is a more welfare-friendly method but its effects are different depending on the strain of bird.

Research from the University of Saskatchewan shows that the impact of beak trimming poultry at a young age, if done properly, is minor. This is compared to the greater impact on flock welfare of not trimming.

Researchers globally have studied the impact of beak trimming and beak trimming methods, as this practice has been criticized for its impact on bird welfare.

“Research in our lab and labs of others have found that when beak treatment is performed appropriately, with proper techniques and at young ages, the negative impact of the treatment itself is relatively minor in comparison to the larger animal welfare concern of feather pecking and cannibalism,” writes Dr. Karen Schwean-Lardner in a report about the project.

In terms of beak treatment she explains that infrared beak treatment (IRBT) birds are less impacted from a welfare perspective than birds treated with hot blade trimming. She adds that there is some suggestion that using IRBT does not seem to affect all strains of birds in the same way, particularly white versus brown feathered strains

A research team led by Schwean-Lardner and Dr. Henry Classen has recently completed a three year project which addresses questions regarding the need to adjust IRBT settings for specific bird breeds.

The team worked with  two white and two brown feathered commercial strains of laying hens. Their work  looked specifically at beak morphology differences between the strains, and aimed to determine the impact of variation in IRBT settings on beak characteristics, healing and re-growth, production and welfare.

“It is imperative to establish guidelines for infrared treatment use that result in the benefits producers expect, while maintaining the welfare qualities of this procedure.”

In their report, Classen and Schwean-Lardner describe the main findings of the research team:

“IRBT settings should be adjusted for specific conditions, including strain, but it also suggests that some variation in treatment settings does not have important welfare or production effects.”

They went onto explain: “The effects of IRBT are short-lived and minor, and likely a reaction to the treatment and beak sloughing. The nature of beak sloughing due to treatment was quite different and the effect was strain specific. However, despite these differences, growth and production later in life were unaffected.”

“This research will hopefully produce consensus on the value of the technique, and will also refine the technique to permit ever increasing success in beak growth in an animal welfare appropriate way.”

This research was funded by the Poultry Industry Council.  The research team would like to thank  Clark’s Hy-line Inc., Brandon Man. for allowing them to work in their facility.