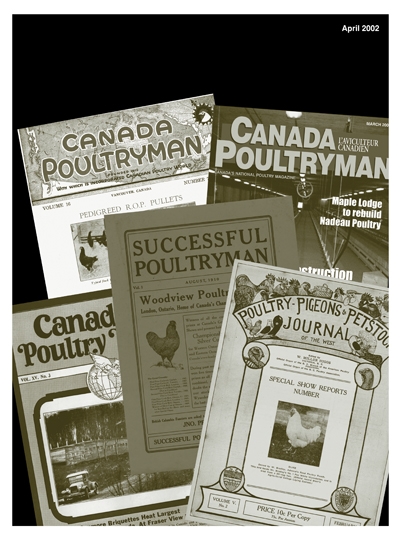 This is an exciting issue for our magazine. As you have probably seen by now, our April issue looks different. After months of discussions, both with the magazine staff and our readers, “Canada Poultryman” has been renamed “Canadian Poultry.” It’s a subtle change but one that we feel better reflects our Canadian poultry industry as it progresses into the 21st century.

I wonder how many of our readers know the history behind the magazine. I must admit that I knew the magazine has been around for awhile but it came as a complete surprise to me to learn that it is no spring chicken — the first issues date back to as early as 1909. I thought its story was worthy of telling.

Last year, Tim Muise, our publisher, and I were asked by the organizers of the International Poultry Exhibition to put together an historical overview of the magazine — a “Covering the Poultry Industry With Pride” promotion. This display was then placed, front and centre, at the IPE in Atlanta this past January. A similar display will be on view at the London Show, April 10-11.

Putting this display together was a fascinating experience. Searching the archives was like opening a time capsule containing information on many important events in Canadian poultry history. Articles on genetic breakthroughs, the discovery of anticoccidials, advances in equipment, the first fast food poultry in Canada, the creation of our marketing boards, on-farm food safety and on and on. The industry has come a long way and so has the magazine!

We also discovered that this is not the first name change the magazine has experienced. Initially it was called the “Successful Poultryman,” but quickly progressed through “Poultry, Pigeons and Petstock Journal” (I shudder at the biosecurity implications of this combination in today’s industry), “Canadian Poultry World” and finally to “Canada Poultryman” by 1912. Ninety years later, we celebrate its anniversary by becoming “Canadian Poultry.”

Throughout nearly a century of publishing, the farmer has been the reason behind this magazine. Its mandate has been to provide the most up-to-date information and be a useful tool in helping the farmer be a successful poultry producer. That still continues today.

The role of the farmer, however, has changed significantly over a century of poultry production. In the first half of the century, the poultryman was literally on his own. There was very little support to rear what few birds he could. By the late 40s and early 50s, commercially reared poultry became feasible due largely to the discovery of anticoccidials. This discovery allowed larger numbers of poultry, both chicken and turkey, to be confined and reared successfully. Science and industry were now playing increasingly more important roles in assisting the farmer in rearing his poultry.

This is even more evident today. Farmers have developed a huge network of industry-related people to help them take their poultry products from gate to plate. It’s no longer just the poultryman who looks after the birds while they are housed on his farm. Poultry production has become a partnership with other members of the Canadian industry acting with the farmer to place, rear and market safe poultry products for the Canadian consumer. The Canadian poultry industry has become a complex, multi-faceted, multi-billion dollar industry and, as our new name implies, we want to be there to cover all of it and get as much accurate information as possible out to our “Canadian Poultry” readers.

This was a brief trip down memory lane and I welcome you to come and see our historical display at the London Show. If you can, drop by our booth and talk to us. But if you are unable to attend the show, please call or drop me a line so we can discuss not only the past, but the present and the future of “Canadian Poultry.”

Related
From the Editor: December 2012
Tooting it up again
Editorial – June 2002
FROM THE EDITOR: April 2007
Editors’ Picks
Digital Edition