Guts of Growth: To clean or not to clean? 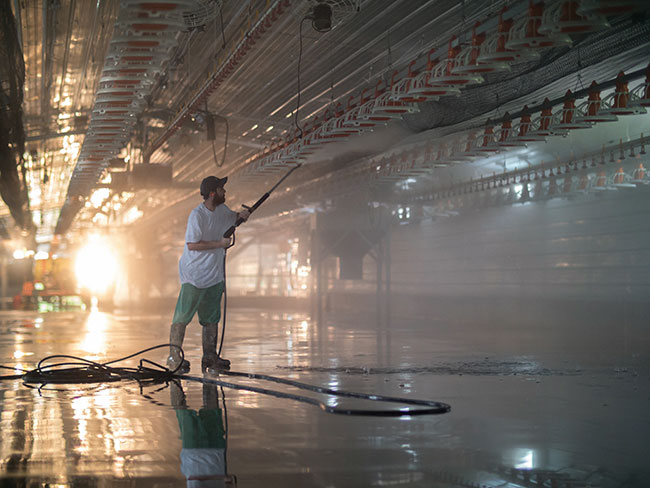 The question of whether to do a complete wet and disinfect clean out of the barn each flock or to do a dry clean and reuse litter, where applicable, often comes up in meetings. When looking into various production systems around the world, specifically broilers, some regions will require a complete wet clean out of the barn, while other regions will complete a dry clean and reuse litter.

The results from these different management techniques have their positives and reasons for being used. Yet, both also have drawbacks that each local industry must deal with.

In Canada, there are different recognized on-farm food safety programs for each poultry sector. They include required and suggested cleaning programs to take place after each flock.

All these different requirements are important for each sector and have been mandatory or suggested based on the needs of that sector.

Regardless of whether producers apply dry cleaning or the reused litter method, if a viral or bacterial challenge has negatively impacted a flock then it is critical that they complete a full cleaning and disinfection program with the appropriate downtime between flocks.

Reused litter
In some poultry sectors and regions, such as broilers in the U.S., litter is a high added cost and it can be challenging to source or find good quality litter. It is also labour-intensive to spread uniformly across large barns and adds time to cleaning out the barn if the producer uses new litter each flock. By reusing litter over many flocks, sometimes several years, farmers can significantly reduce these challenges.

Reused, deep litter acts as a sponge for moisture, cushion for the birds and can add some heat into the barn. If producers use wood shavings for the litter (farmers in the U.S. commonly use pine shavings), the reused litter helps to soften the sharp edges found within the shavings.

Some of the challenges with reused litter can be a buildup in moisture, which leads to a risk for higher ammonia levels, foot pad dermatitis issues and increased pathogens. In fact, in the U.S. with reused litter very high ammonia levels are found just under the “cake”, crusted dry litter material, and if not treated properly between flocks can lead to many challenges such as stress and blindness. To combat these risks, there are a couple of management techniques that producers often use with reused litter.

When the birds first leave the barn, the litter is “de-caked”, which means that the top layer of the litter is removed. To accommodate the different management techniques and to allow drying time, the downtime between flocks must be at least 10 days and is often longer (e.g., 14 to 18 days), especially in raised without antibiotics production systems.

To help keep litter dry throughout production and between flocks, producers may use litter treatment in addition to ventilation and heating. However, certain production systems such as organic may not allow litter treatments to be used.

To help manage pathogen loads, producers often compost or windrow the litter between flocks so it can heat up to at least 54°C (130°F). To windrow litter, it is better to have a longer downtime because this process requires time and expertise.

Often, producers place a fresh top layer of litter on the reused litter, but the depth may vary from three to twelve centimeters depending on their preference. The less fresh shavings farmers add to the top of the reused litter the higher the challenge with ammonia and pathogens from the previous flock.

Gut microbiota and immunity
The intestinal tract of poultry starts to grow within the egg and continues to develop to 10 days or 12 days post placement for a chicken or turkey, respectively. The gut microbiota will start developing in the egg but go through most of its development in the barn.

A dry clean may reduce the total number of bacteria and parasites present but does not change the percentage or representation of which of these microbes are present. A wet clean with disinfection, when completed properly, will help to dramatically reduce viruses, bacteria and fungi, and may have an impact on the representation of which microbes are present. If producers are bringing litter into the barn, then whether the litter is fresh or reused will have differing influences on the overall flock.

A bird will generally start pecking at their environment from the day of placement. Litter, dust, feed and water provide several sources where bacteria or other microbes can enter the gut of the bird.

Litter has a complex and dynamic microbiota that is generally composed of gastrointestinal and environmental microbes. But which microbes dominate in the litter and when they dominant depends on the litter management technique. Additionally, the type of litter producers use can also impact which microbes can be introduced, grow and survive.

In a 2016 university experiment conducted by Wang and colleagues in the U.S., they looked at both gastrointestinal and litter microbial changes over the life of a six-week broiler flock. The study compared new litter where dry cleaning was conducted between flocks versus reused litter that was composted between six consecutive flocks. There was always a two-week downtime between flocks and both new and reused litter barns had five centimeters of fresh pine shavings added in the barn.

When looking at mid-gut intestinal samples, the researchers found more bacteria representation in the reused litter versus the new litter at 35 days of age. On the other hand, the cecal digesta samples showed increased diversity and better microbiota maturity at 10 days of age in the reused litter birds versus the new litter birds. The scientists noticed the faster maturity of the microbiota early but the difference seemed to fade by 35 days of age. 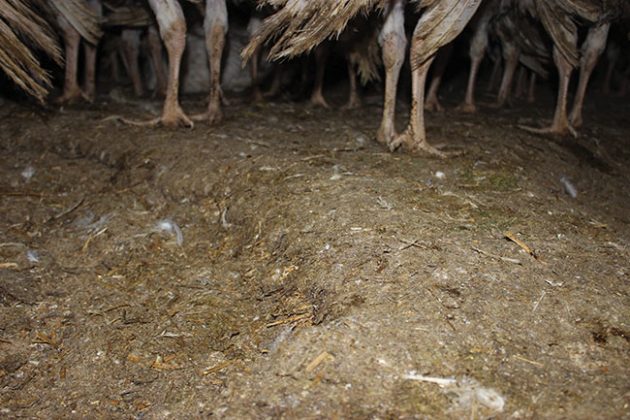 Reused, deep litter acts as a sponge for moisture, cushion for the birds and can add some heat into the barn. PHOTO CREDIT: Laurie Ann Weber.

The greater impact on the young versus the older birds could be related to the fact that as birds age there is a natural progression of the gastrointestinal microbiota and more feces go on the litter, which can be pecked at creating a never-ending cycle. In the field, veterinarians who have worked with both reused and new litter systems have had similar observations to this study in that birds on reused litter generally build a mature, stable and diverse microbiota faster (e.g., in one to three cycles) than birds reared on new litter (e.g., three to five cycles or more).

When comparing how the intestinal immune system reacts when new or reused litter had been used with broilers, the researchers found some interesting differences. Broilers raised on reused litter appeared to have a low-level chronic inflammatory response in the gastrointestinal tract compared to broilers raised on new litter, which had more of an anti-inflammatory response.

Since birds raised on reused litter are exposed to different litter bacteria earlier than birds raised on new litter, this may help to explain this difference. However, it is difficult to know if this inflammatory response has a major impact on performance if good litter, bird and barn management is maintained.

The severity of coccidiosis is a numbers game where the more parasites ingested the worse the challenge. In the field, there are often multiple Eimeria parasites that cause coccidiosis. Interestingly, in university trials there was no difference when or how birds gained protection against mid-gut coccidiosis, whether they were reared on new or reused litter. However, in the field, experts say that birds reared on reused litter have earlier access and may ingest higher numbers of Eimeria parasites than birds reared on new litter. Additionally, if reused litter has higher moisture near the top of the litter this will impact how the parasite can survive. These differences can have an impact on the dynamics of the parasites in the barn, how birds get infected and how coccidiosis vaccinations may work.

Necrotic enteritis is a disease challenge caused by the bacteria Clostridium perfringens. C. perfringens is a bacterium that can either be picked up from the environment as a pathogen or can be found as an opportunistic bacterium in the lower intestinal tract of the bird.

Additionally, if the bacterium C. perfringens is opportunistic in the intestinal tract then developing a mature and diverse intestinal microbiota faster in the life of the flock, as may be the case with well-managed reused litter, may help with competition to keep this opportunistic bacterium in check.

Conclusion
Both the dry-clean and reused litter systems have their own benefits and challenges. However, one thing that producers who manage in either system would agree on is that it is critical to have a complete clean and disinfection with good downtime if a viral, parasitic or bacterial challenge has negatively impacted the previous flock.