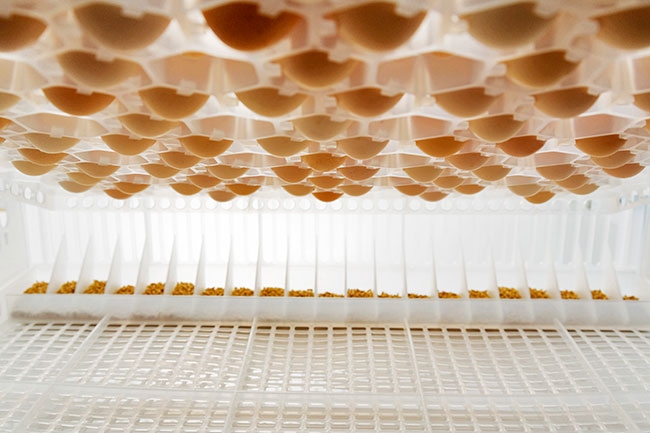 Frustrated with a lack of capacity and the dwindling quality of chicks, a farmer-driven plan was hatched to bring a new, innovative technology to Ontario. A little over a year ago Ontario farmers Dave Brock and Murray Booy began a discussion around the current state of Ontario’s broiler hatching capacity and the growing need to evolve the industry towards Raised Without Antibiotics (RWA) production.

“In Ontario the broiler guys were looking for a stronger quality chick because of the desire to move to RWA production. It is a production challenge and they are looking for the highest quality chicks they can get,” Brock, a long-time Ontario egg hatching producer, says.

Booy explains that there are only three major producers of chicks in the province, all of which use traditional technologies. “I was formerly on the Chicken Farmers board and have certainly attended several farmer meetings over the last several years and there has been quite a bit of discussion around chick supply and chick quality across Ontario. The current market structure is insufficient to meet the growing demand and evolving tastes of Ontario consumers,” Booy says.

Brock and Booy initiated Trillium Hatchery Inc., a consortium of Ontario farmers with the goal of opening a new leading-edge hatching facility in the province. Booy says that having the hatchery owned and governed by farmers with a collaborative structure was important to ensure a fresh, new approach to the chicken value chain in the province.

“The company will be owned and directed by farmers for farmers where the return on investment is not only measured on the financial statements, but measured where it really matters, in the barn,” Booy says of the plan.

Fast-forward a year and the farmer-directed initiative is now well underway. In June, Trillium Hatchery Inc. purchased land in Stratford, Ont., and began site preparations to build the 65,000-square-foot hatching facility that will hold an initial capacity of approximately 16 million chicks per year.

“My production is around 16 million chicks. I tend to have a steady egg supply line because I have four major flocks and so that is what is giving us the base but we hope to add other egg hatching producers as the demand increases,” Brock says.

The project comes with a $20 million price tag and will utilize the HatchCare system, a revolutionary incubation and chick care system, that is said to produce stronger chicks in a more animal-friendly manner (see sidebar for more). The Trillium Hatchery will be just the second hatchery in Canada and the third in North America to adopt the HatchCare system.

In an effort to create the most successful and efficient operation, Booy and Brock called upon Doug Kaizer, chief financial officer of Synergy Agri Group Ltd., the first hatchery in Canada to adopt the HatchCare system.

Kaizer was instrumental in bringing the HatchCare system to Canada in 2015 and quickly agreed to become the third founding partner in Trillium Hatchery Inc. Trillium stakeholders plan to draw on the experiences learned by the Synergy Agri Group Ltd. to develop the most modern, up-to-date HatchCare hatchery.

“My role in this project is to take the things that we have learned so far and make changes in the Trillium hatchery. There are some improvements there already but every day we are continuing to get a better understanding of the system’s full potential,” Kaizer says. “What we are doing right now is absolutely the baseline of the system. There are a number of opportunities to advance these facilities even further.”

SYNERGY’S EXPERIENCE
As of January 2017, the Synergy hatchery, which is located in Port Williams, N.S., has been producing 200,000 HatchCare broiler chicks per week and has been in operation for two years. “The Nova Scotia Hatchery has proven itself to be superior in all aspects of incubation and hatching performance and has shown the benefits, both financial and on-farm performance, for the broiler and egg hatching farmers,” Booy says.

In terms of the outcomes of the HatchCare system, Kaizer says implementing it was the best decision his company ever made. He says the advanced production process has proven to have several benefits to the chicks, the environment and and also to farmers.

He reports improvement in chick health, mortality, weight gains and feed conversion. The system is producing stronger chicks with less infection, resulting in reduced antibiotic use.

“I think the biggest thing that we are going to bring to the table is the future of growing chicken. This hatchery system sets the broiler farmer up to be a very good broiler farmer. It hits all the things in the future we are aiming for by 2020 and this hatchery is going to help the broiler producers be that 2020 farmer,” Kaizer says. Producers receiving the HatchCare chicks report improvement in early brooding, with the chicks being less demanding, less stressed and arriving with a built-in pattern for eating, drinking and resting.

INDUSTRY IMPACT
The Trillium Hatchery is scheduled to begin production in October 2018. Industry members say the opening will be a significant step forward. “I think there is a huge anticipation for this from Ontario broiler producers. I think that they are keen to see it happen and the sooner the better,” Brock says.

Robin Horel, president and CEO of the Canadian Poultry and Egg Producers Council, says the creation of the new hatchery is certainly a positive step for the industry, but he doesn’t expect to see any major impact nationally.

“New technology and investment is always good for the industry but on a national level we aren’t going to see any major impact from any one-single hatchery,” Horel says. “The industry has been growing phenomenally in recent years and so I believe that this will just contribute to that momentum.”

In terms of moving towards RWA production, he notes that nothing is going to slow consumer demand or expectations for RWA production, but new technology and production innovations may make things easier for farmers. “The industry will move to RWA no matter what technology is being used. But, if there are ways to develop stronger chicks it will certainly aid producers,” Horel says. “I am familiar with the HatchCare system but I have not been to the Nova Scotia hatchery myself. I understand the science and that stakeholders are happy with the results they are seeing but I can’t personally say that this technology is proven. However, if it is making the production process easier for producers, then all the better.”

The HatchCare System
Developed in the Netherlands by HatchTech, the HatchCare incubation and chick care system underwent years of testing before coming to market in 2014. The system begins by allowing for the fertility of the eggs to be checked using new lighting methods. From there, only 100 per cent viable embryos are incubated.

The chicks then hatch under optimum and uniform conditions. They remain in individual crates, known as the HatchTraveller, from hatching to delivery. This provides ongoing uniformity in temperature, airflow, and humidity. The HatchTraveller also holds the egg in the most favourable position for hatching and is designed to separate the chicks from the egg shell once emerged.

But the real game changer is in the system’s ability to provide food, water and light immediately after hatching. In traditional hatcheries chicks are shipped right after emergence and do not receive food and water until after they’ve settled in at the farm.

“Instead of a traditional hatch where they go two days back, we take them a day ahead, and there are significant benefits to that,” Kaizer says. “Brooding conditions are different, they are easier, the mortality is less. There is less four-day, 10-day Coccidiosis and that strength continues on with high growth rate and higher feed conversion.”

A number of studies have been conducted on the benefits of providing immediate access to food and water with results showing that early food and water can improve growth performance, often resulting in higher body weight and breast meat yield. Residual yolk uptake also shows significantly higher in chicks that have been fed immediately.

“It is actually helping with the absorption of the residual yolk sac. Within the residual sac there are all the antibodies that came from the mother hen, and with faster absorption, it helps develop the immune system of the chick,” Brock explains.

Booy adds that they have seen tremendous amount of interest from farmers in Ontario that are in, or are moving in the direction of, organic or RWA production models, because of the strength of the chicks’ immune system. “The main reason farmers want this hatchery system is because these chicks are arriving to the barn stronger, heavier, healthier, which gives the barn manager less challenges all the way through the growing cycle.”