Energy Supplement: How to optimize energy use

What producers can do to use heat and electricity more efficiently. 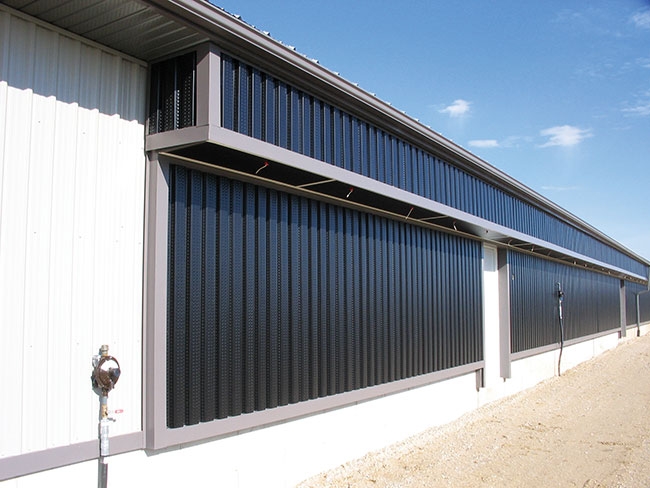 Solar pre-heating walls, which use unglazed solar collectors, are a passive way to reduce barn heating requirements over the cooler months of the year. PHOTO CREDIT: Exacon

Heat exchangers are another way poultry farmers – especially broiler farmers – are becoming more energy efficient. These systems recover heat that would have been exhausted to the outside through normal ventilation practices, and we’ve devoted an entire story in this issue to their design advancements (see page 29).

To determine which other energy efficiency technologies or strategies producers should consider, Canadian Poultry checked in with leading experts.

Farah Kanani and Yang Li note that demands for heating and ventilation can be reduced by optimizing the barn envelope (for example, building a barn with the right orientation to the sun, minimizing air infiltration). Interior factors such as weight of birds and air quality are also important.

Kanani and Li are graduate students of Nathan Pelletier, assistant professor at the University of British Columbia and NSERC/Egg Farmers of Canada industrial research chair in sustainability. This year, they will complete a review of published studies on energy efficiency approaches in the poultry industry, identifying best technologies and management strategies on the farm and along the entire egg supply chain.

Solar pre-heating walls, which use unglazed solar collectors, are a passive way to reduce barn heating requirements over the cooler months of the year. These systems also contribute to cooling a building in summer by providing shade to an outside wall. Kanani and Li note that the air which enters through small openings in the outer wall can be pre-heated (in the space between the outer wall and the barn) by 15 to 20°C before it’s ducted into the barn.

A case study of an Ontario egg farm with one of these systems done by SolarWall’s engineering arm concluded that it provided the barn on this particular farm with a total heated air volume of 20,000 ft3 per minute and provided a payback time of five years.

However, individual farm ROI would obviously depend on many factors, including weather patterns each year.

Submetering and energy assessments
If you’ve already looked at solar pre-heating air systems and heat exchangers, minimized infiltration, optimized your equipment, installed LEDs, optimized insulation and are keeping motors and fans clean, a next useful step is a total farm energy assessment. This analysis of energy use throughout an entire operation by an outside expert can also include a close look at various modification options.

Full energy assessments include detailed load analysis using submetering: measuring electricity being used in a circuit, piece of equipment, entire building or another operational unit. To accomplish this, energy assessment companies temporarily install submeters to collect a few weeks of data. Some farms take it even further and permanently install a few sub-meters to gather data on an ongoing basis.

The data that’s gathered can inform the practice of peak shaving – using less electricity during hours when it’s most expensive (peak rate times) or reducing demand usage peaks (some electricity agencies charge higher rates for usage above certain levels). Peak shaving or demand shaving is obviously possible only in areas with different electricity rates throughout the day or peak demand billing.

An example of peak shaving on a poultry farm might involve scheduling, when possible, egg collection and processing, or feed/manure belt operation, so that it occurs when electricity rates are lower or when another operation is not occurring. However, experts note that any change in practice must be put in place permanently to gain benefits on your bill in the case of demand shaving. That’s because billing usually reflects the very highest peak use during a 12-month period.

Total savings of peak/demand shaving will obviously depend on the operation’s distribution tariff structure and what changes are made. That said, experts believe most farms that operate above their contract demand level have an opportunity to save money by doing it.

Cost of an assessment
Numerous provinces offer funding for on-farm energy efficiency improvements, including energy assessments. Alberta for example, has offered funding for equipment upgrades, energy assessments and submetering activities for a few years, but as this story went to print, it was not possible to say which programs would be continued due to the recent election.

SaskPower has funding for various business customer energy efficiency projects. Manitoba Hydro offers financing for upgrades to gas and electrical systems on farms and more. And B.C. offered many opportunities from 2012 to 2018 through B.C. Agriculture Climate action. The province also still offers a free online B.C. Farm Energy Assessment Tool but does not track uptake numbers or type of farm that use it. There are also energy assessments being supported under the Environmental Farm Plan in B.C.

Hydro Quebec has a long list of efficiency opportunities that are eligible for funding on farms, from LED lighting to solar pre-heating systems. Efficiency Nova Scotia has an on-site energy manager for the agriculture industry who will review projects and provide farmers with step-by-step guidance on how to become more energy efficient. New Brunswick Agriculture and NB Power offer funding for on-farm energy efficiency audits and more.

However, it’s quite affordable to get assessments done without any funding. The cost varies depending on the level of detail, size of farm and more, notes Ron MacDonald, who is a semi-retired agriculture industry engineer who owned his own Ontario-based consulting firm called Agviro for decades and has done many farm energy assessments.

A basic walk-through of one barn, which takes a few hours and involves identification of issues and providing recommendations, costs at least $1,000. The payback for that, MacDonald says, can be virtually instant or at worst, within about a year. “We always find at least one thing,” he says.

A more detailed level two analysis (including ROI on recommended changes and computer simulations) starts at $4,000, and a level three analysis that includes submetering at a farm with multiple barns costs $6,000 to $10,000.

Solar pre-heating walls, which use unglazed solar collectors, are a passive way to reduce barn heating requirements over the cooler months of the year.

These level two and three assessments are often done, MacDonald explains, as part of a process involving major upgrades. Therefore, ROI for the assessment itself is blended into the ROI for all the upgrade investments.

A little over a year ago, Deerfield Hutterite Colony in Magrath, Alta., had an energy assessment completed (paid for by covered under a funding agreement Egg Farmers of Alberta had with the funding program Growing Forward 2) and installed submeters at the barn level (paid for the Alberta government under the Canadian Agricultural Partnership program, which covers the cost of up to three energy meters per farm) a little over a year ago.

The free-run layer barn and pullet barn were new builds in 2017 and share a natural gas boiler heating system with some in-floor heating and some overhead heaters in both barns.

Barn manager Simon Waldner says electricity use for both barns in winter 2017/2018 and winter 2018/2019 was similar. A little less use has resulted from one of the energy assessment recommendations to put a timer on the pump, which delivers hot water to sinks so it runs 10 minutes every couple of hours instead of constantly.

There were several other energy assessment recommendations, such as a installing a control for the fans in the egg cooler (which currently run constantly) but these have not been implemented as they weren’t deemed worthwhile by farm management.

Towards the future
As for which energy efficiency technologies will likely be used in the future on Canadian poultry farms, Kanani and Li note that factors like technology evolution, policy/regulatory incentives, identification of context-appropriate systems and strategies based on ‘life cycle thinking’ will all be important. They believe however, that technology choice is ultimately a business decision, one that “will likely be strongly influenced by ROI considerations.”

Low or no-cost ways to save energy
The following points are summarized from Saving Energy on Your Farm BC Poultry Farms by B.C. Agriculture & Food.