Why chicken reigns in restaurants and at home – and why it’s unlikely to be budged from its throne anytime soon. 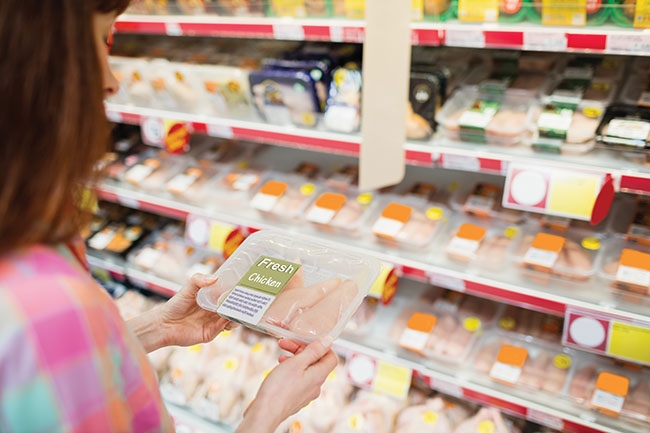 Chicken continues to be the number one meat in Canada. Its health profile allows it to fit well into most lifestyles and diets. Photo: Fotolia by Adobe Stock

If you think you’ve noticed more chicken than ever on restaurant menus and being served at family gatherings – let alone at your own dinner table – you would be right.

“Chicken’s health profile allows it to fit well into just about any lifestyle and diet – it’s low fat, low carb, keto, paleo, low calorie, etc.,” notes CFC manager of communications Lisa Bishop-Spencer. “There’s also been a greater effort in Canada to bring chicken to front of mind for consumers, using our various digital platforms and via our ongoing promotion and marketing of the ‘Raised by a Canadian Farmer’ brand.” She adds that competitive prices, especially against beef, is probably also a big factor.

Yet, there are still other reasons chicken reigns supreme. The simple fact of Canada’s growing population is one, and greater exposure to multicultural chicken dishes is yet another. “The versatility of chicken allows for many different tastes and recipes,” Bishop-Spencer says, adding that “gone are the days when chicken was ‘just something chefs put on the menu for people who don’t know what to order,’ to paraphrase some famous chef a few years ago…Now, we’re seeing chicken on more and more menus, but more importantly, chicken is being served in more and more ways at home. Gone, too, are the days of roast chicken for Sunday dinner – now, it’s used for everything from quick and easy recipes to fancier, more complicated dishes.”

Indeed, foodies love chicken and it’s a go-to for busy families as well. Bishop-Spencer notes that “for those who have less time, there are more and more convenience products at the grocery store, ones that allow folks to feel like they’re preparing a meal when they’re really just assembling.”

Bring on the wings
Mid-scale restaurants know it wouldn’t be smart to exclude wings from their menus. And while traditional wings are still very popular, U.S.-based market research firm Food Management reports that upper-scale restaurants are now taking wing preparation to new levels, adding extra layers of flavour by charring wings before tossing with sauce, or marinating before deep frying and tossing. Another new wing-prep method is to marinade or dry-rub, then employ the ultra-fashionable sous vide process (food is placed in a bag and cooked for hours in a hot water bath to promote tenderness), before a finish-fry in bacon fat. Popular 2018 wing flavours include mango-chili, Korean BBQ, chimichurri (a rub of parsley, red wine vinegar, garlic, red pepper flakes and oil), garlic parmesan and Sriracha-butter sauce.

CFC notes that it’s getting more restaurants that specialize in wings approaching it all the time in order to be able to use the ‘Raised by a Canadian Farmer’ logo – and wing recipes are in higher demand on the CFC website as well. “We actively promote our wing recipes at various sporting times of year and the response from consumers is consistently excellent,” Bishop-Spencer reports. “We spend every year at the end of January answering media questions from large and small outlets alike about whether there’ll be enough wings for that year’s Super Bowl.”

To find out if there’s truly anything to worry about, we contacted Robin Horel, president of the Canadian Poultry and Egg Processors Council. There’s always ample supply, he says, but at the same time, “wings have gone from cheapest item on the menu 20 years ago to one of the highest, higher than boneless breasts, just due to demand. Demand is highest around Super Bowl, Stanley Cup and other celebrations of course, and Buffalo wings started it all off.” Horel adds that some restaurant companies have also started offering ‘boneless wings’ made from breast meat.

Wings are not the only chicken trend, however. Horel reports that “slowly but surely – it’s early days and it may be a blip – dark meat (thighs and drums) is becoming more popular. We still eat more breasts and wings, but dark meat parts seem to be in increasing demand.”

Nikolas Koiou, director of poultry marketing at Maple Leaf Foods, confirms an increased demand from retailers for dark meat products over the last three years. He believes this is due to these products being lower in cost, because their smaller portion sizes fit well with smaller households, and because dark meat is popular with new Canadians. It’s also likely a result, Koiou adds, of the fact that chicken consumption in general has increased and perhaps dark meat items provide some variety for consumers who love chicken, but don’t want to eat chicken breast more than two or three times a week. Another trend noted by Maple Leaf is increased demand for ‘raised without antibiotics’ products.

Chicken continues to be the number one meat in Canada. Its health profile allows it to fit well into most lifestyles and diets.

Chicken developments in Ontario
Chicken Farmers of Ontario’s (CFO) Artisanal Chicken and Local Niche Market Programs were launched in 2015. The former is for producers interested in growing between 600 and 3,000 chickens annually for select markets such as local farmer markets, and the latter allows participants to produce between 6,000 and 60,000 chickens for larger distinct local markets.

Chicken breed and production methods are up to individual growers. Patricia Shanahan, communities program manager with CFO says both programs have lots of room for participation, but that more farmers are applying every year.

In late 2015, MEALsource, Ontario’s only non-profit health care purchaser, reported to Canadian Poultry magazine that there were no Ontario-based bids for that year’s chicken contracts, which meant the vast majority of chicken products supplied to Ontario’s health care institutions is coming from the U.S., with a bit from other provinces. Most contracts are for two years, so they were up for bidding again in January 2017, but MEALsource manager Candice Bester says nothing changed at that point. She notes that there are always Ontario companies bidding for turkey, raw egg and cooked egg items, and that her organization hopes for more Ontario-based chicken product bids in January 2019.

Restaurant chicken trends
Let’s return to the restaurant scene for a deeper look at just how much chicken dominates. Chicken was one of the top six food trends CNBC identified for 2017, and according to Technomic food industry market research firm, from June 2015 to June 2016, the top 250 U.S. restaurant chains added 325 new chicken items to their menus. Even if you’ve never heard of the chain called Chick-Fil-A, you likely won’t be surprised to learn it’s currently beating out all other fast food chains across the U.S. – and that’s all because of chicken.

Chick-Fil-A’s extremely popular fried chicken menu items, served with a unique mayonnaise, led it to achieve (according to Bloomberg News) an average of US$4.41 million per restaurant location in 2016 – much more than the US$2.55 million made at the average U.S. McDonald’s outlet that year.

McDonald’s has, of course, taken notice. It’s not only offering more chicken menu items all the time, but is moving closer to offering fried chicken items similar to Chick-Fil-A’s. Already, McDonald’s U.S. sells three items with southern-style breading (two sandwiches and tenders/strips), but according to Bloomberg News, McDonald’s is planning to employ some kind of pressure-frying chicken preparation method similar to Chick-Fil-A, as mentioned in a recent three-year chicken product growth plan presented by McDonald’s to its U.S. franchise owners.

If all that doesn’t convince you chicken rules the restaurant scene, know that the fastest-growing U.S. chain serves only chicken. To be exact, Raising Cane only serves chicken tenders, either in large family-sized boxes or in a basket or sandwich, all with the chain’s unique sauce (and fries, freshly-made coleslaw, freshly-baked sesame-seed pull-apart garlic bread, and either fresh ice tea or lemonade). The chain increased its sales in 2016 by over 25 per cent, and by last July, had reached fastest-growing chain status according to Nation’s Restaurant News. There are now over 310 locations in the U.S.

For its part, chicken fast food giant KFC seems to be holding its own. It now offers various bowls, tenders, grilled items and of course, its Double Down burger: two pieces of boneless chicken as the bun, with bacon, cheese and other toppings in the middle. The Double Down was originally offered as an April Fool’s Day prank in 2010, and it’s now a recurring limited-time menu item in many countries around the world, says Stephen Scarrow, senior marketing manager of advertising and media at KFC Canada.

On March 26, KFC Canada brought back the Double Down in a new form for a limited time – the Waffle Double Down. This sandwich features a bun of two chicken fillets enclosing a Belgian waffle drizzled in a maple aioli sauce, which the firm calls “a sweet nod to KFC’s Canadian fans.” The Double Down is KFC’s best-selling Canadian new menu item ever, with sales of over 350,000 in its first 10 days in 2010.

Heritage Chickens (also in California) or heritage breed birds from BoBo Chickens in upstate New York. One of the most upscale restaurants in Las Vegas, at the famous Bellagio Hotel, was the first in the city to recently start serving free-range chicken, in this case from Pasturebird, a rotational grazing operation from nearby Riverside County, Calif. It’s clear that whatever consumers enjoy – home-made, fast-food or high-end chicken offers something for everyone.