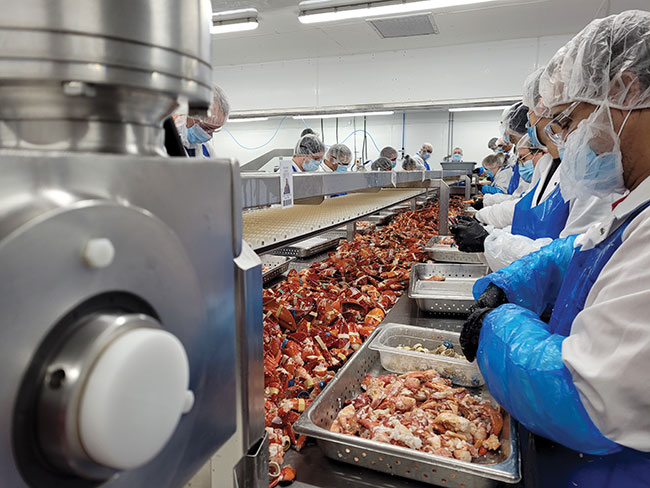 In Atlantic Canada, the seafood industry is struggling with how to deal with by-products and waste more sustainably. At the same time, the poultry industry is challenged with high feed costs. What if the two sectors could be brought together to develop a solution of mutual benefit?

Feed represents approximately 60 to 70 per cent of the total cost of production for poultry in Canada. Calcium is critical for the production of good quality eggs; ground limestone and oyster shell are currently the most common calcium sources in Canadian laying hen diets.

According to Dr. Stephanie Collins, assistant professor in monogastric nutrition at Dalhousie University’s Department of Animal Science and Aquaculture, being able to use calcium sources that are less expensive but without negative impacts on production could reduce costs for farmers.

“Replacement of oyster shell and limestone, large and fine grind, with locally derived calcium sources could have a direct beneficial impact on the regional poultry industry due to reduced transportation costs of the ingredient,” she notes.

A win-win opportunity
It turns out Atlantic Canada has a good calcium source on its doorstep: The seafood industry. Much of its processing by-products, though, are considered waste product and end up in landfills. Not only is that bad for the environment, but seafood processors must pay tipping fees for disposal.

The shell is also a source of chitin and astaxanthin. Chitin is a polysaccharide found in seafood shells and insect exoskeletons that has cholesterol-lowering properties, whereas astaxanthin is an antioxidant and is what causes the reddish pigment in lobster, salmon, shrimp and other seafood.

Enter Riverside Lobster International Ltd. The Nova Scotia seafood processor has a strong commitment to sustainability and was looking for beneficial, value-adding solutions to address its seafood waste.

Derek Anderson, a now-retired adjunct professor at Dalhousie University’s Department of Animal Science and Aquaculture, and Janice MacIsaac, a research associate at the Atlantic Poultry Research Institute, had contacts with another seafood processor, Saint Laurent Gulf Products Ltd. They had previously researched using other seafood by-products in poultry diets.

Saint Laurent recommended the research team to Riverside Lobster for a project to test the nutritional value of repurposed lobster shells in laying hen diets.

“The product itself is proprietary but it involves the use of whole lobster shells,” says Collins, who became the principal investigator on the project after Anderson retired.

Study details
The 40-week trial involved Lohmann Lite LSL white and Lohmann Brown-Lite hens that were allotted to the trial starting at 27 weeks of age.

For each 28-day period during the trial (there were 10), researchers tracked feed consumption, body weight, egg production and egg quality. At the end of the trial, the team determined egg yolk astaxanthin content and conducted a calcium balance trial.

“The hens consumed it with no problem and there was no negative effect on feed conversion, egg production or body weight,” MacIsaac says. “There were also no negative impacts on the eggs and all treatments were in a positive calcium balance.”

Next steps
The two seafood processors are now working on a submission to the Canadian Food Inspection Agency (CFIA) to have the lobster shell extract approved as a certified feed ingredient. Data from this particular research project is being used to support the application. Once approved by CFIA, the ingredient will be made available to any feed mills who wish to access it and include it in poultry rations.

The study did not evaluate any economic aspects related to feeding lobster shell as a calcium source, but MacIsaac notes the ingredient will need to be cost competitive in order to gain traction in the marketplace.