LRIC Update: Poultry and the future of food 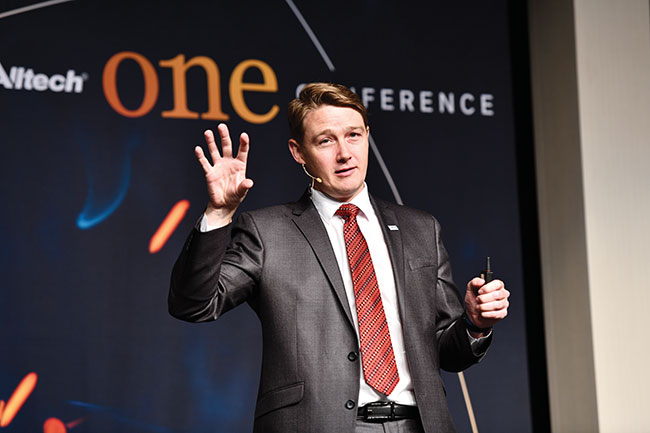 Given the many pressures facing livestock and poultry producers today, from climate change challenges to animal-free meat and eggs, will food production in the future still include animals?

Definitely, according to Vaughn Holder, research project manager in beef nutrition at Alltech. He says the data around the importance of livestock for future food security and climate change mitigation is unequivocal – it won’t happen without animal agriculture.

“We usually talk about 2050 and producing enough food to feed the world in 2050, but that’s the wrong conversation,” Holder said while presenting at a Horizon Series webinar hosted by Livestock Research Innovation Corporation (LRIC) in September. “How we are going to feed the people of the world right now is the right conversation.”

That’s because population protein intakes and associated environmental metrics for the world’s 205 countries and territories are based on gross protein, which doesn’t account for digestibility or amino acid composition of that protein to decide how good it is at filling human nutritional requirements.

When those additional parameters are considered, only about one third of those countries and territories are protein secure with two thirds having a protein intake – mainly plant-based and plant proteins are less digestible to humans than animal proteins – that is below required levels, which Holder calls “quite terrifying”.

“That’s why any conversation around societal intervention that results in a reduction of food production around the world is extremely irresponsible,” he says. “We don’t need more calories; we need more nutrients.”

Tackling an issue like climate change isn’t as straightforward as simply proposing the elimination of livestock agriculture, he adds.

Only about four per cent of the world’s land is suitable for growing crops – not enough to feed the world’s population. Livestock and poultry bring additional nutrients into the human food system by converting nutrients into protein that people can consume.

Ruminant animals like cattle do this by eating grasses, crop residues and forage crops, but monogastric livestock like poultry are also an important part of the solution. Some of the world’s most tightly controlled and balanced rations are fed to poultry and pigs, Holder notes.

“The vegetable proteins we feed poultry and pigs are incomplete, so we balance their diets by adding protein,” he says, adding this brings more benefit to the human food system than if people were to consume corn and soybeans directly. “Monogastrics have a very important role in improving protein availability to humans because we can correct for the deficiencies in plant-based proteins through ration formulation.”

United Nations data suggests 86 per cent of global livestock feed is inedible to humans. So, livestock is performing a service by keeping all that human inedible feed out of the plant carbon cycle.

Another important consideration is that reducing meat production in North America doesn’t reduce global meat demand. It will simply shift meat production elsewhere where it may well have a much higher carbon footprint, effectively causing emissions from livestock farming to increase.

At the same time, replacing food production with food processing – the creation of plant-based meat, milk and egg products – is not bringing new protein into the human food system, but just creating new uses for existing ones.

“So, how do we increase food production in the face of protein insecurity but reduce greenhouse gas production? It’s not all doom and gloom – it’s about using the resources and the knowledge that we have,” he says.

If the world were to apply what is known about efficient livestock agriculture to parts of the world where it can make a difference, carbon emissions could be reduced by as much as 45 per cent. That includes capturing unused nutrients from grasslands through grazing, preventing carbon from going into landfills by feeding by-products to livestock and ensuring livestock farmers are paid for carbon sequestration activities.

“We can make much more food with the same environmental footprint as before if we implement things we know will improve the efficiency of livestock. The world is hyper-focused on emissions without also considering sequestration] and agriculture is essentially the only industry that has carbon capture as its central function,” Holder says.

Watch the full webinar with Vaughn Holder or any of LRIC’s 11 other webinars and white papers of topics of importance to the livestock industry at livestockresearch.ca/white-papers.