What the poultry industry has learned from COVID-19.

One of the main lessons from the avian influenza outbreak that hit parts of Canada and the U.S. hard between 2014 and 2015 was that communication is key in times of crisis. Photo Credit: B.C. Chicken Marketing Board

When it comes to momentous times that are etched into our memories, late 2014 to mid-2015 was a notable period for those in the Canadian and U.S. poultry world (although probably not as memorable as 2020 is becoming for the world at large). That was when highly pathogenic H5N2 avian influenza ripped through the U.S. after popping up in B.C. It eventually made its way to three barns in Ontario, affecting hundreds of millions of chickens in total.

If there’s anything that event taught us, it’s that communication is key. Supply managed and non-supply managed groups, provincial and federal governments, input suppliers and service providers, to pigeon fanciers and parrot owners to those that work with wild birds – no stone can be left unturned when it comes to a disease outbreak in an industry where everything and everyone is connected.

Five years later, these connections are what continuously helped the Ontario poultry industry run like a well-oiled machine (up until a few months ago, at least). Production was in sync with consumer needs. Deliveries were on time and efficient from farm to fork. The workforce was stable and demand was predictable, with about 60 per cent of poultry product going to grocery retail and 40 per cent in food service.

In short, the economy and the poultry industry were doing pretty well.

Pandemic impacts
Then, everything changed in March when the World Health Organization officially declared COVID-19 as a pandemic. Restaurants and schools were closed, meaning people were preparing more meals at home, and large family gatherings were banned. This forced food industries to make the shift from food service to retail – colossally easier said than done.

This massive shift led to food service product showing up in grocery shelves out of spec and with less cut up. (Remember whole roaster birds in a bag?) On top of that, rising numbers of positive COVID-19 cases led to labour struggles. Processors and further processors were unprepared for the immediate needs for physical distancing requirements and employee screening, which led to processing shutdowns and rising freezer stock.

This uncertainty about food security also resulted in another unexpected ripple effect aside from toilet paper hoarding: An increase in the number of “pandemic pets”, or birds kept in backyards in the hopes that they would provide a stable and personal supply of eggs or meat. This has led to concerns about biosecurity for the commercial industry, food safety and potential animal housing and welfare issues down the line as we get to the colder months and begin facing the challenges of overwintering birds.

On the upside, while the current pandemic has brought into light supply chain management issues no one had ever even thought of, it has demonstrated that the system works – supply management was able to manage supply. This was done by diverting some product to alternative markets. For example, 30-egg flats of medium eggs were showing up in retail shelves, when historically they went to food service.

In response to the changing demand, the poultry meat and egg sectors have also looked at production cuts to prevent the market from being flooded with product as we work our way to a new normal.

What’s more, the industry isn’t doing it all alone. Federal and provincial governments continue to invest in our food systems to make them more robust during difficult times.

Times have been, and continue to be, difficult. That said, we are all coming out of this better prepared for emergencies than ever before, with information and services readily available to assist farmers and industry with solid options for things like emergency depopulations and their following mass disposals.

These don’t just apply to pandemic situations. Extreme weather events and natural disasters can collapse entire barns and cause power outages that shut everything down for days or even weeks. The threat of trespassers forces producers to think about whether they know their rights, how secure their barns and equipment are, and the underlying motives of new hires. Not to mention manure combustion and barn fires, feed and water contamination, food safety concerns, death or injury of family or staff – and in COVID-19 times, other fun surprises such as market closures and quota reductions. 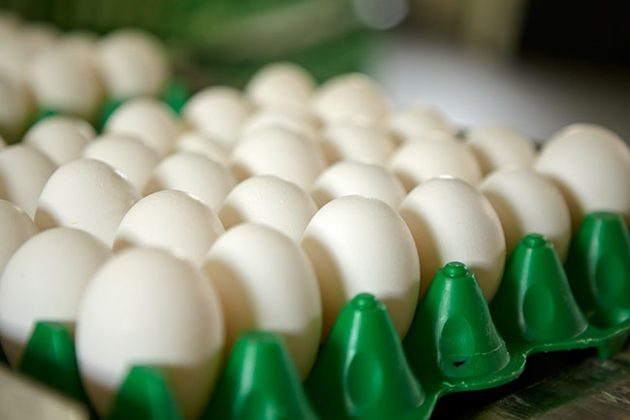 As a result of the pandemic, 30-egg flats of medium eggs were showing up in retail shelves, when historically they went to food service. PHOTO CREDIT: Poultry Industry Council

Emergency planning tool
With so many things that could go wrong (most often on a late Friday afternoon), it would be convenient to have to have some sort of handbook on how to deal with it all; perhaps a binder filled with emergency standard operating procedures?

And that’s exactly what Ontario’s pork industry has done with the “On-Farm Emergency Response Planning Guide” that can be mailed or downloaded and printed right off their website (see page 20 for more).

A similar guide for the poultry industry is in the works at the Ontario Ministry of Agriculture, Food and Rural Affairs (OMAFRA), in the hopes that it will provide producers with a guide to dealing with whatever may come up, and some “due diligence”.

As the provincial poultry specialist for OMAFRA, I am not the first call that someone makes when they have a disaster – that honour often goes to their industry representative. However, I am usually the last call when everyone is trying to figure out what they need to do and someone finally says, “Call Al!” Now, with an emergency response binder, you don’t have to call Al.

In the meantime, those in the poultry industry need to know what their emergency response plans are and regularly review them.

Not in our heads, but out on paper and ink in a clearly labelled binder, as well as – in this day and age – electronically on phones and computers.

Disasters can happen anywhere, and as this year has shown us, they can hit entire industries, countries and continents all at once. At the end of the day, producers are responsible for the safety and security of their employees and livestock. A little time spent adopting some proactive measures now will likely save a lot of time and money when (not if) our farms experience an emergency in the future. History may repeat itself, but the lessons learned from each event don’t have to.

Al Dam is provincial poultry specialist with the Ontario Ministry of Agriculture, Food and Rural Affairs (OMAFRA) and Isabelle Kwon is a poultry research assistant with OMAFRA.

Related
From the Editor: Poultry groups step up for vulnerable
Supply management lives up to its name during pandemic
Virus-ready poultry producer can’t escape supply chain shock
From the Editor: Providing stability in times of crisis
Editors’ Picks
Digital Edition